Lionel Messi scored and then went off injured as Barcelona beat Sevilla 4-2 at Camp Nou, in a six-goal thriller. 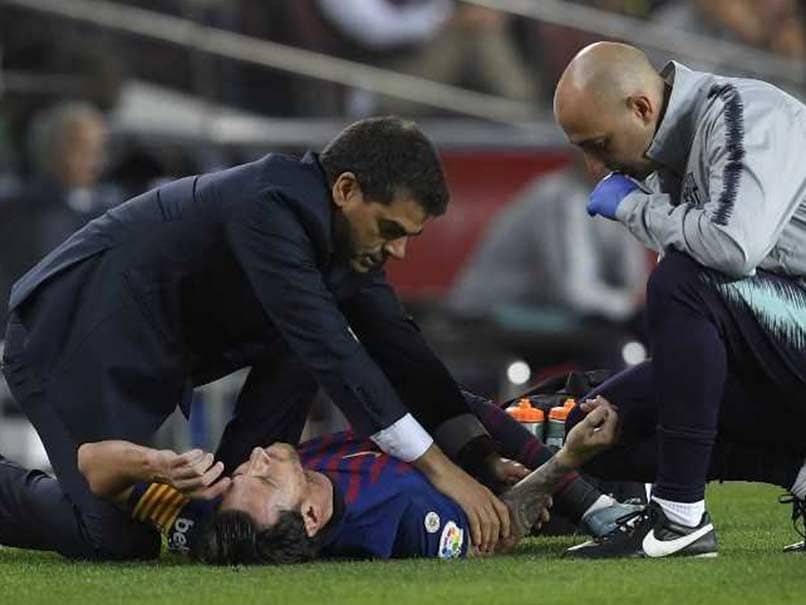 Lionel Messi is expected to be out for three weeks with a fractured right arm but his last contribution was to help send Barcelona back to the top of La Liga on Saturday. Messi scored and then went off injured as Barca beat Sevilla 4-2 at Camp Nou, in a six-goal thriller that never looked like ending in anything other than a home win. Any joy at jumping above in-form Sevilla, however, was tarnished by Messi's injury, which will now rule him out of next weekend's Clasico against Real Madrid. A Barcelona club statement read: "Tests carried out on Leo Messi have confirmed that he has a fracture of the radial bone in his right arm. He will be out for approximately three weeks."

It means Messi will also miss the Champions League match at home to Inter Milan on Wednesday, and probably the return trip to Italy on November 6, as well as league games against Real Madrid and Rayo Vallecano in between.

"It is clear it is a blow," Barca coach Ernesto Valverde said. "We know what he gives us and we know what he does to the opposition.

"We have to prepare ourselves, it is clear we are going to notice the loss of Messi but we have players that can cover."

Messi fell to the ground following a tussle with Sevilla's Franco Vazquez and, as his right hand tried to cushion the landing, his elbow appeared to buckle.

Messi was helped off the pitch by medical staff and, despite having his right arm heavily strapped, he was finally substituted in the 26th minute.

"Emotionally, we know when he is there, he gives us more confidence because he is the best in the world," Gerard Pique said. "But it does not have to affect us."

Philippe Coutinho had opened the scoring and Luis Suarez's penalty, which he also earned, made sure of victory before a three-goal flurry in the final 11 minutes.

Pablo Sarabia and Luis Muriel twice reduced the deficit to two for Sevilla, either side of a sweeping volley from Ivan Rakitic.

Even without Messi, Barca might be confident of seeing off Madrid, whose slump had continued on Saturday with a 2-1 loss at home to Levante. Barcelona, meanwhile, seem to have sparked a rival.

Since drawing at home to Athletic Bilbao last month to make it three games without a win, they have blown Tottenham away at Wembley, taken a point away to Valencia and now eased past Sevilla, who came into the weekend top of the table.

Barca fans had chanted, "don't touch the badge" before kick-off after president Josep Maria Bartomeu had announced plans to change the club crest had been shelved.

They were soon celebrating a goal too as Coutinho bent a sumptuous right-footed shot into the far corner with only two minutes on the clock.

Messi doubled the advantage, racing clear on the counter-attack before jinking inside and curling into the bottom corner with his left foot. It was his last significant involvement.

Ousmane Dembele was Messi's replacement but Suarez took on the mantle, too quick to his own heavy touch and brought down by Sevilla goalkeeper Tomas Vaclik. Suarez buried the penalty.

The game seemed up but Marc-Andre ter Stegen had to make a brilliant double save to deny Sarabia and then Wissam Ben Yedder with his thigh.

Sarabia gave Sevilla hope with 11 minutes left, his shot deflecting off Clement Lenglet and in, but Rakitic took the steam out of any comeback with a well-struck volley. Muriel added what proved only to be a consolation in injury time.