Manchester City took the lead in the 17th minute with Aguero continuing his remarkable run of goalscoring form at the Etihad. 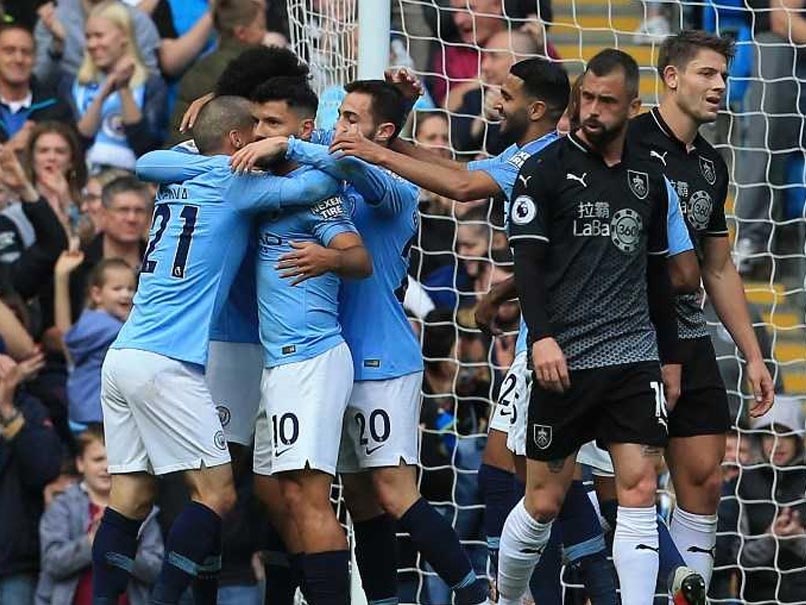 Sergio Aguero scored the opening goal of the match.© AFP

Manchester City's devastating attack was back to peak form against their old goalkeeper Joe Hart as a 5-0 victory over Burnley at the Etihad on Saturday returned Pep Guardiola's side to the top of the Premier League. After a rare goalless outing in their last league fixture, a draw at Liverpool, Manchester City's win featured two goals in as many minutes early in the second half from Bernardo Silva and Fernandinho, adding to Sergio Aguero's first-half effort, before Riyad Mahrez and Leroy Sane completed the rout.

There was yet more good news for Manchester City manager Guardiola when he re-introduced Kevin De Bruyne, out with a knee injury he suffered in the opening week of the season, to his line-up as a 58th-minute substitute.

Manchester City took the lead in the 17th minute with Aguero continuing his remarkable run of goalscoring form at the Etihad.

David Silva and Sane carved out the opening with a couple of neat and precise one-twos that opened up space in the Burnley area for the former to cross towards the far post.

There, Aguero had made room to sweep in a routine finish from eight yards past former team-mate Hart - the forward's 16th goal in his last 12 league appearances at Manchester City's home ground.

Aguero should have doubled the lead in first-half injury-time, somehow clearing the crossbar from six yards after Hart had saved superbly from a David Silva header.

But the result was put beyond any doubt with a blistering spell of Manchester City pressure that brought two goals in quick succession.

In the 54th minute, the hosts scored a slightly confusing goal, after Burnley players appeared to stop playing, waiting for a penalty to be awarded against them following contact between Sane and Jack Cork.

But referee Jonathan Moss waved play on and David Silva had the presence of mind to chip the ball back from the by-line for Bernardo to fire past Hart from 15 yards.

Mauricio Pochettino believes Erik Lamela is finally ready to fulfil his potential after the revitalised winger fired Tottenham to a 1-0 win against London rivals West Ham on Saturday.

Lamela struck with a cool header late in the first half at the London Stadium to give Tottenham their fourth successive Premier League victory and lift them into the top four.

That made it five goals in just eight appearances this season for Lamela, who was making only his second league start of the campaign.

Lamela could start more often after this influential display underlined his improvement since returning from over a year of injury problems that required surgery on both hips.

Pochettino has often kept Lamela on the bench in the past, but the Tottenham boss says the Argentine is earning his trust.

"The form of the player sometimes changes. The most important thing is to trust him," Pochettino said.

"We believe in him. He is a player that is more mature. He is more relaxed, he's calm in front of goal. That is the key."

West Ham United English Premier League Football
Get the latest updates on Fifa Worldcup 2022 and check out  Fifa World Cup Schedule, Stats and Live Cricket Score. Like us on Facebook or follow us on Twitter for more sports updates. You can also download the NDTV Cricket app for Android or iOS.