Real Madrid set the record for the longest goal-drought in the club's history during a surprise 2-1 defeat by Levante. 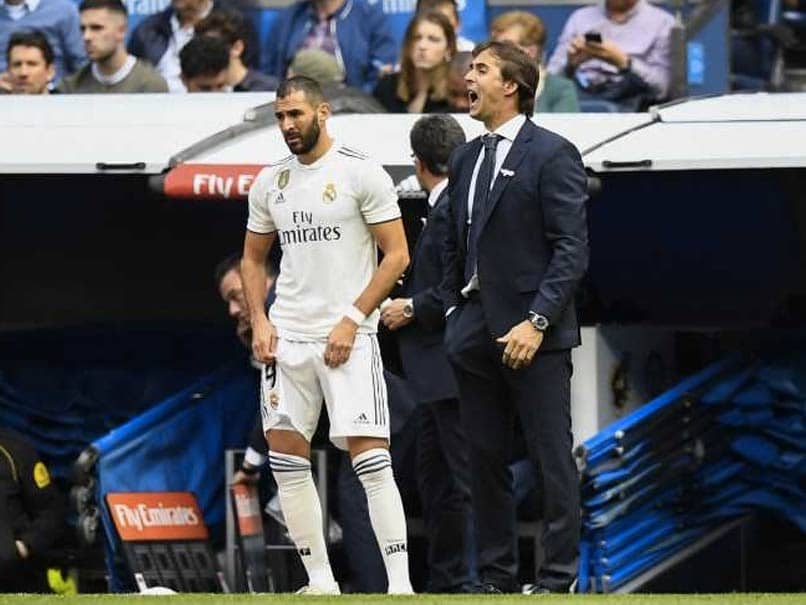 Real Madrid failed to ease the pressure on coach Julen Lopetegui and instead set the record for the longest goal-drought in the club's history during a surprise 2-1 defeat by Levante on Saturday.  A defeat means Real Madrid have now gone five games without a victory and by the time Marcelo gave them hope of a comeback at the Santiago Bernabeu, they had gone 481 minutes without a goal too. The club's previous worst run had been 464 minutes, in 1985. For a team that prides itself on flair and flamboyance, it is a streak that reflects just as badly on Lopetegui as the results, which could leave Real Madrid four points adrift of Barcelona later on Saturday, with a 'Clasico' to come next weekend at the Camp Nou.

If Barcelona's players were watching, they would have been licking their lips at the sight of Raphael Varane handing Levante a two-goal lead here after just 13 minutes. Jose Luis Morales and Roger Marti, from the penalty spot, were the beneficiaries.

At the final whistle, Lopetegui stood on the touchline, with his hands on his hips, staring ahead in disbelief.

He had left Gareth Bale and Karim Benzema on the bench, perhaps due to fitness issues, and the gamble backfired, despite both making a difference when brought on in the second half.

Real Madrid were two behind after 13 minutes and both came from Varane mistakes. The first was more blatant as he misjudged the flight of Sergio Postigo's through ball and Morales was clear.

Thibaut Courtois rushed out but Morales nicked it round him and fired into the open net.

It got worse as Varane handled a bouncing ball on the edge of the area but as Real Madrid's wall waited, Guillermo Cuadra refused to allow the free-kick to be taken.

The Video Assistant Referee said Varane's handball was inside the box and Roger converted the penalty.

For the rest of the half, Real Madrid were scatty and imprecise, their finishing spoiled by bad luck but a lack of composure too.

VAR proved their undoing again, ruling Marco Asensio's follow-up offside after Casemiro had headed against the crossbar. Mariano was also denied by the woodwork while Ramos and Lucas Vazquez missed from three yards.

At half-time, there were a scattering of white handkerchiefs -- the traditional expression of discontent -- but more whistles. After the restart, the home fans sang "echale huevos", meaning, "play with some balls".

Lopetegui had thrown Bale on for Alvaro Odriozola at the interval while Benzema and Dani Ceballos were introduced on the hour. Not before the 56th minute had passed, however, and Real Madrid's drought became their longest ever.

Benzema shot straight at Oier Olazabal, who then pushed a bending Bale free-kick wide. Finally, Real Madrid scored, with that pair involved again as Bale flicked to Benzema at the back post. He picked out Marcelo to drive into the roof of the net.

Real Madrid believed again as Benzema struck the far post with a curling effort and Mariano thought he had grabbed an equaliser in the 87th minute. The striker, however, had strayed just offside. For Real Madrid, it was not to be.

Levante Gareth Bale Football
Get the latest updates on IPL 2021, IPL Points Table , IPL Schedule 2021 , live score . Like us on Facebook or follow us on Twitter for more sports updates. You can also download the NDTV Cricket app for Android or iOS.