After India played out draw against Bangladesh, former India captain, Bhaichung Bhutia said that the team needs to learn from their mistakes and move on. 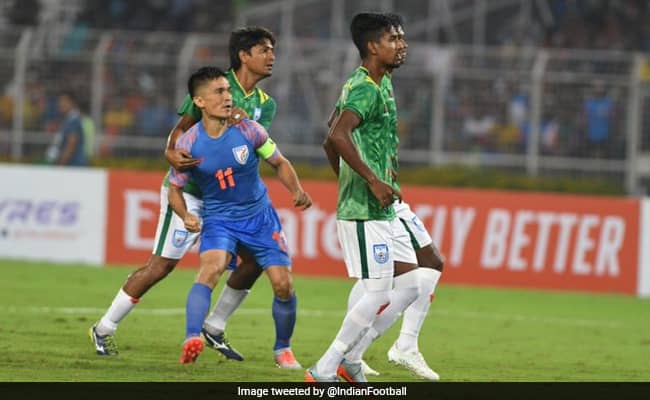 Bhaichung Bhutia said India have a young side and they will learn from their mistakes.© Twitter

Former India captain Bhaichung Bhutia on Wednesday said India's 1-1 draw against Bangladesh in the Group E World Cup qualifiers was "unfortunate", adding that the team needs to learn from their mistakes and move on. A last-gasp Adil Khan goal saved India the blushes as they held a spirited Bangladesh, ranked 83 places below them, to a draw. Saad Uddin had given the away side the lead in the first half from a free kick. "I could not watch the match so I won't be able to comment much on it, but it's unfortunate," Bhutia told IANS.

India held Asian champions Qatar to a 0-0 draw last month and were hot favourites to win against Bangladesh who lost to Qatar 0-2 at home before this match.

"They are a young side. They have talented players and they will only learn from this. Yes it's not a great result but these boys and the team needs to continue the work they are doing. They will get better," Bhutia said.

India captain Sunil Chhetri also expressed his disappointment as he and other players came close to scoring but just could not get the ball past the goalpost until the 88th minute when Adil scored off a corner to draw level.

Taking to Twitter, Chhetri expressed gratitude to the fans who turned up in large numbers to support the Indian team.

"We couldn't deliver a performance to match the atmosphere at the Salt Lake last night, and the dressing room is very disappointed about it. We couldn't capitalise on the chances we got, but this is a process on the pitch and in the stands. You turned up, we'll keep attempting to," Chhetri tweeted.

After the game, head coach Igor Stimac admitted that his team conceded a "silly goal" and that they have a lot to work on ahead of the next set of matches.

"Bangladesh were resilient. We did not react well and conceded a silly goal. India is trying to play modern and technical football. There is still much more to do," Stimac told reporters at the post-match press conference.

Backing his young players, the Croatian 1998 World Cup bronze medallist said: "We need to stay optimistic. We have shown we have confidence to play against anyone."

India, who have two points from three games now after losing 1-2 to Oman besides the Qatar and Bangladesh draw, next take on Afghanistan on November 14 in Dushanbe.