India vs Bangladesh, World Cup Qualifiers: Igor Stimac, head coach of Indian football team, warned the home supporters not to underestimate Bangladesh who are ranked 83 places below them. 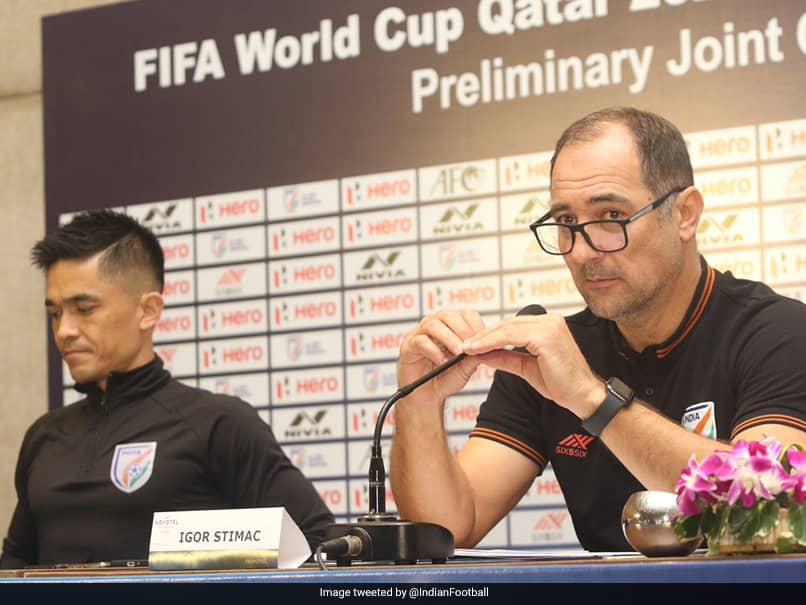 Igor Stimac said that he is "satisfied" with the way the team is shaping up.© Twitter

India head coach Igor Stimac on Monday said a "favourite" tag in sport means nothing ahead of their Group E Asian Qualifiers for the FIFA World Cup tie against Bangladesh in Kolkata. Giving India's famous 0-0 draw against Qatar as an example, Stimac, who was part of the Croatian team that finished third in the 1998 World Cup and helped them as a coach to qualify for the 2014 World Cup, warned the home supporters not to underestimate Bangladesh who are ranked 83 places below them.

"Being favourite in a game is nothing. We proved that in Qatar. It's 11 v 11. There are favourites and underdogs but that doesn't mean the favourite will win. It's about team work, it's about team building. Analyzing ourselves and ask ourselves what we can do. No point trying to analyse others. If we can work like this we will do well," Stimac told reporters at the pre-match press conference in Kolkata.

Bangladesh gave a good account of themselves against Qatar in their last qualifying match at home on Thursday. They lost 0-2 but created a flurry of chances.

Asked about their rivals, Stimac said Bangladesh should have won against Qatar keeping in mind the chances they created.

"I wouldn't like any of you to underestimate Bangladesh. Bangladesh did a very good job against Qatar. They created more chances. They should have won the game.

"They have not come here to lose the match they have come here to win. They have worked very hard in last 18 months. They have some very talented youngsters just like us. Don't make it hard by underestimating them. Let's go into this game by being respectful to the Bangladeshi team," said the 52-year-old, who took over the reins in May from Stephen Constantine.

Bangladesh, currently ranked 187th, have won seven of their 13 international matches since May 2018 when Jamie Day took charge of the side, and Stimac pointed out the statistic as well to highlight India's job at hand on Tuesday.

"It's great to be favourite in one game but that's the kind of pressure we need to take and we have to handle it."

Stimac said that he is "satisfied" with the way the team is shaping up in this short period keeping in mind the lack of playing time for the players during his time in charge as the national coach.

"I am very satisfied with what we have done in such a short time. It's not easy when you have such a big gap without competitive football," said the coach referring to the off-season when players were not with their clubs.

"We had 20-25 days to prepare for these games and you can't expect radical changes. I was lucky that we found some great young players. They are great characters and are led by great leaders. Such a mixture of youth and experience has given us a chance to be what we are."

Stimac has introduced a host of new faces in the King's Cup and Intercontinental Cup before playing the World Cup qualifiers, not focusing on the results but building a team which can play in his style of play revolving around keeping the ball and building from the back.

"I have some 40 players on my sheet. I am monitoring them. But the door is never closed for others. The ISL starts on October 20 and I am going to watch all the players. Our goal is not just these qualifiers. We have 2026 in mind. We are working according to our aims and targets. In between if we qualify for the next round we will grab it with both hands," he said.

Stimac also voiced his concern about holding a camp ahead of India's two games against Afghanistan and Oman on November 14 and 19 away with the ISL then on.

"I am worried about the November camp. We have to find a way so that the ISL clubs allow us to have a proper camp. Right now it is looking very uncertain."

India are placed fourth after two matches with one point while Bangladesh are still to open their account after losing against Afghanistan and Qatar in their first two games. India lost to Oman 1-2 in their opener in Guwahati.

Comments
Topics mentioned in this article
Football Igor Taran
Get the latest updates on India vs Australia Series, check out the India vs Australia Schedule for 2020-21 and Ind vs Aus live score . Like us on Facebook or follow us on Twitter for more sports updates. You can also download the NDTV Cricket app for Android or iOS.