The Blue Tigers were dealt a blow when Sandesh Jhingan was ruled out for six months after suffering an injury during a friendly against ISL club NorthEast United FC. 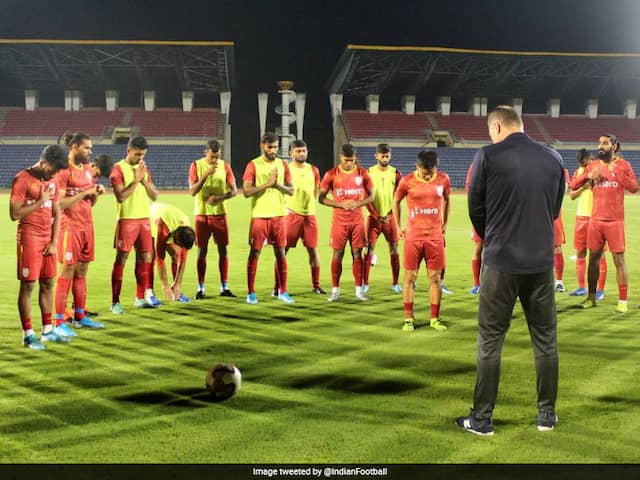 The Indian football team will arrive in Kolkata on Sunday.© Twitter @IndianFootball

Full-back Rahul Bheke was on Saturday retained in India's 23-member squad for the World Cup qualifier against Bangladesh to be played in Kolkata on October 15 despite having an injury. Bheke picked up a groin injury but was part of India's preparatory camp in Guwahati. The Blue Tigers were dealt a blow when defensive mainstay Sandesh Jhingan was ruled out for six months after suffering an injury during India's friendly against ISL club NorthEast United FC (NEUFC) in Guwahati a few days back.

Bheke did not take part in the friendly in which all other squad members played but Croatian head coach Igor Stimac has decided to keep him in the squad.

"Credit to Bengaluru FC and the medical unit of the national team that Rahul (Bheke) is back on his feet. He's a strong contender for starting the match against Bangladesh," Stimac said in a statement.

Barring Jhingan and an injured Anwar Ali (Jr), Halicharan Narzary, Farukh Choudhary and Nishu Kumar have been released from the camp.

The Blue Tigers will arrive in Kolkata on Sunday, a statement said.

"Halicharan, Farukh and Nishu gave others a tough run for their money and the decision was not an easy one. They came very close to their competitors," Stimac said.

"Sandesh is our iron man. He'll be missed in Kolkata but knowing him, I'm pretty sure he'll come back much stronger," Stimac said.

Indian National Physio Gigy George informed that "Sandesh has suffered on his left knee ACL tear and needs to undergo surgery. It usually takes six months for return to sport. He will be monitored constantly during the rehabilitation phase so that he comes back on the field sooner."

"It's really sad. It's a big loss for us, especially at this moment. I could imagine how would he feel missing this game but he's a strong guy and he'll come back strongly soon," Sandhu said.

Adil Khan, who has developed a strong partnership with Jhingan at the heart of the defence of late, feels Sandesh's absence provides others with a chance to prove their worth in front of the Kolkata crowd.

"He (Sandesh) plays a huge role in our team and he's the leader in our defence. Now, the onus is on us to live up to the expectations. We want to win it for him," Adil echoed.