India had to settle with a 1-1 draw against Bangladesh in the FIFA World Cup 2022 qualifiers on Tuesday. 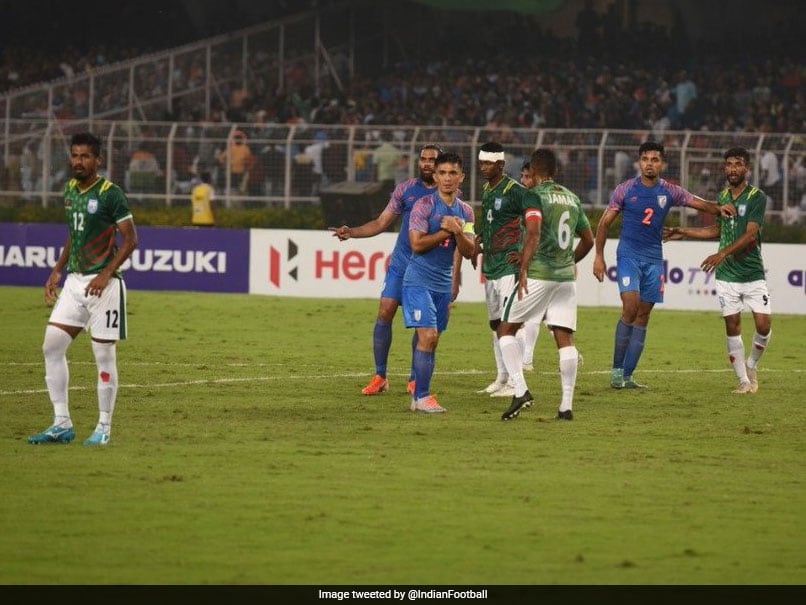 India football skipper Sunil Chhetri on Wednesday expressed disappointment with the team's result against Bangladesh in a FIFA World Cup 2022 qualifier match on Tuesday. India had to settle with a 1-1 draw against Bangladesh at the Salt Lake Stadium in Kolkata and with this, the road ahead has gotten difficult for the Blue Tigers. Chhetri took to Twitter to express his disappointment and said: "We could not deliver a performance to match the atmosphere at the Salt Lake last night, and the dressing room is very disappointed about it. We could not capitalise on the chances we got, but this is a process on the pitch and in the stands. You turned up, we will keep attempting to".

We couldn't deliver a performance to match the atmosphere at the Salt Lake last night, and the dressing room is very disappointed about it. We couldn't capitalise on the chances we got,but this is a process on the pitch and in the stands. You turned up, we'll keep attempting to.

In the match between both sides, Saad Uddin had put Bangladesh in front in the first half, but India center-back Adil Khan equalised late in the game to draw the home side level.

The Blue Tigers were chasing the three points from the match. Chhetri had an early shot on goal saved by Bangladesh goalkeeper Ashraful Islam Rana.

India's Bheke had a chance to goal in the opening minutes of the match as he won a free header from a corner. However, his header flew over the bar

As we moved closer to the half-time break, Uddin managed to get on to the end of a set-piece from the left flank, past an outstretched Gurpreet Singh Sandhu, to put Bangladesh in the lead.

India head coach Igor Stimac rolled the dice in the second half as he brought on playmaker Brandon Fernandes in place of Mandar Rao Dessai, while winger Lallianzuala Chhangte came on for center-back Anas Edathodika.

With less than two minutes of regulation time left, it was Adil Khan, who came up with the equaliser, as he glanced his header past the near post, and into the back of the net.

India gave it an almighty effort in the closing stages of the match. Four minutes into injury time, Sunil Chhetri brought down an aerial ball for an unmarked Manvir Singh, who volleyed it wide.

Both the teams ended the day with a point apiece, and India now remain on the fourth spot with two points in Group E of the FIFA World Cup Qatar 2022 Qualifiers.