Despite Gareth Bale starting for the first time, it was on-loan Carlos Vinicius who made an impressive debut as Tottenham enjoyed a 3-0 win in their Group J opener. 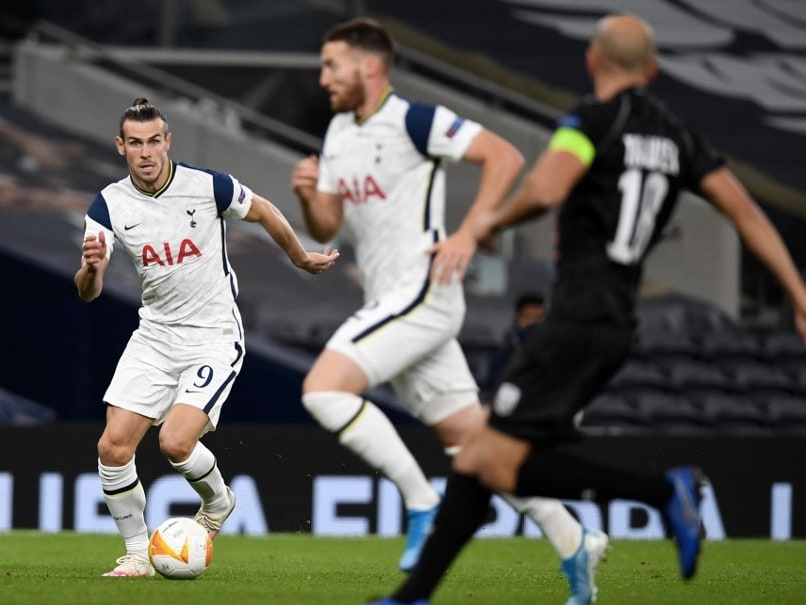 Gareth Bale helped Tottenham to an opening 3-0 victory over LASK of Austria in their Europa League campaign on Thursday but Celtic suffered another setback with a home 3-1 loss at the hands of Zlatan Ibrahimovic's AC Milan. There were also wins for Spurs' Premier League rivals Arsenal and Leicester which left English sides looking back on a promising week in Europe with six victories and one draw from Champions League and Europa League games. Despite Bale starting for the first time since his return from Real Madrid, it was on-loan Carlos Vinicius who made an impressive debut as Tottenham enjoyed a 3-0 win in their Group J opener.

Vinicius started in place of the resting Harry Kane and he made goals in either half for Lucas Moura and Son Heung-min, while he would have also netted himself had Andres Andrade not scored an own goal.

Bale made that goal where Andrade put through his own net.

Leicester City made the perfect start in Group G with a comfortable 3-0 win over Zorya Luhansk of Ukraine.

James Maddison, Harvey Barnes and Kelechi Iheanacho were on the scoresheet.

In Glasgow, Celtic struggled against Serie A leaders Milan who were 2-0 up at half-time thanks to goals from Rade Krunic and Brahim Diaz.

Milan were so comfortable that they could afford to take Ibrahimovic off just after the hour.

Earlier Thursday, Arsenal came from behind to down Rapid Vienna 2-1 and Rangers beat Standard Liege 2-0.

Arsenal, the 2019 finalists under Unai Emery, were struggling to make an impact in Austria.

After a goalless first half they went behind when keeper Bernd Leno fluffed a clearance on a night he will want to forget.

Taxiarchis Fountas capitalised on Leno's clanger, much to the joy of the 3,000 home fans allowed in to watch under coronavirus safety protocol, but the Gunners then turned the game around in four second half minutes.

David Luiz put them level with a deft glancing header off Nicolas Pepe's free-kick, with Pierre-Emerick Aubameyang then tapping home to bag the three Group B points.

It was an eventful night for Mikel Arteta's side with alongside eight yellow cards an eye catching display from Thomas Partey on his first start since his transfer deadline day move from Atletico Madrid.

A frustrated follower of the game from his London sofa was Mesut Ozil, who has been left out of both Arsenal's Europa League and Premier League squad.

"When I can't support on the pitch tonight, I will support in front of the TV in London." tweeted Ozil.

The other Group B game was being played out in Dublin where Dundalk, only Ireland's third ever representative in the group stage, were beaten 2-1 by Norwegians Molde.

In Belgium, Steven Gerrard's Rangers took on Standard Liege fresh from their Old Firm derby win over Celtic which moved them four points clear in the Scottish Premiership last weekend.

With the rain coming down, James Tavernier scored from the spot after Noe Dussenne handled in the area to put them into a 19th minute lead.

Then three minutes into stoppage time Kemar Roofe produced a wonder goal from the halfway line, the ball flying over the head of bewildered keeper Arnaud Bodart.

Benfica had claimed the first goal of the night and they went on to beat Lech Poznan in Poland 4-2 in the other Group D game.

Elsewhere, Bayer Leverkusen ran riot 6-2 against French side Nice and Spanish side Granada, in their first ever European campaign, beat PSV Eindhoven 2-1.

Leicester City Gareth Bale David Luiz Pierre-Emerick Aubameyang Mesut Ozil Football
Get the latest updates on ICC T20 Worldcup 2022 and CWG 2022 check out the Schedule, Live Score and Medals Tally. Like us on Facebook or follow us on Twitter for more sports updates. You can also download the NDTV Cricket app for Android or iOS.