Both Premier League clubs Arsenal and Chelsea were initially drawn to be at home in the first leg. 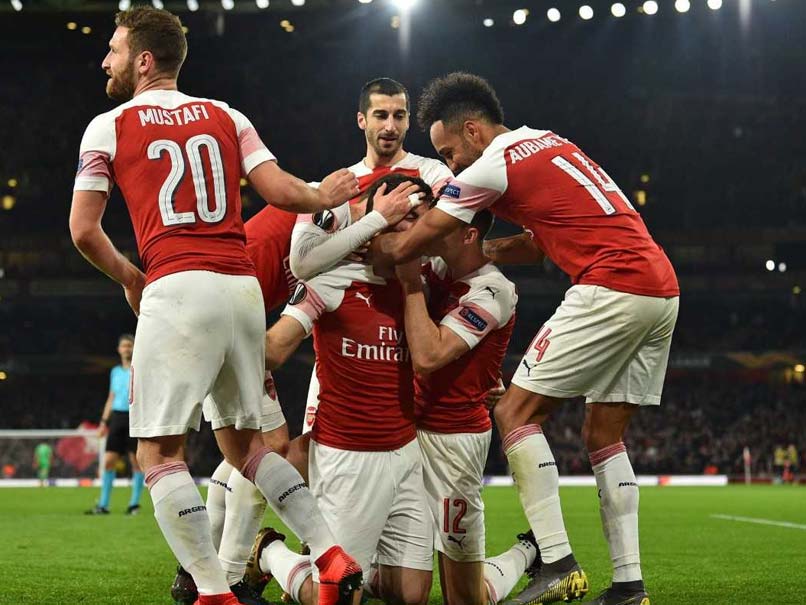 Arsenal overturned a 1-0 first-leg deficit to qualify for the last 16 by beating BATE Borisov.© AFP

Arsenal will face French side Rennes in the last 16 of the Europa League, while Chelsea were paired with Dynamo Kiev in Friday's draw. Both Premier League clubs were initially drawn to be at home in the first leg on Thursday, March 7. However, in order to avoid two games in London on the same night, Arsenal will now travel to France for the first leg, before hosting Rennes at the Emirates Stadium on March 14. Arsenal's draw means that their veteran goalkeeper Petr Cech will return to face the club he represented for two seasons before joining Chelsea in 2004.

The Gunners overturned a 1-0 first-leg deficit to qualify for the last 16 by beating BATE Borisov of Belarus 3-0 on Thursday.

Meanwhile, Rennes reached the last 16 for the first time in their history with a fine 3-1 win away to Real Betis in Spain, a result that gave them a 6-4 aggregate triumph.

The Brittany club finished fifth in Ligue 1 last season and are currently in mid-table, but have impressed since the 38-year-old Julien Stephan was appointed as coach in December.

Arsenal manager Unai Emery - who won the Europa League three years running as coach of Sevilla -- is familiar with Rennes from his two seasons in charge of Paris Saint-Germain.

London rivals Chelsea, the other Premier League club still in the competition, might also view winning the Europa League as their most likely route into next season's Champions League.

After beating Swedish side Malmo 5-1 on aggregate, they might find the going tougher against Ukrainian giants Dynamo though.

The clubs met in the group stage of the Champions League in 2015-16, drawing 0-0 in Kiev before Chelsea won 2-1 at Stamford Bridge.

Elsewhere, Sevilla, who have won the trophy five times including twice in its former guise as the UEFA Cup, will face Slavia Prague.

Widely-fancied Napoli will take on the Austrian champions Salzburg, who reached the semi-finals last season.

Benfica face Dinamo Zagreb, while Valencia's reward for knocking out Celtic is a tie against FC Krasnodar of Russia.

That is one of two ties between Russian and Spanish sides, with Zenit Saint Petersburg drawn against Villarreal.

The final of this season's Europa League will be played in Baku, the capital of Azerbaijan, on May 29.

Alexandre Lacazette Shkodran Mustafi Eden Hazard Football
Get the latest updates on IPL 2021, check out the IPL 2021 Schedule and Indian Premier League Live Score . Like us on Facebook or follow us on Twitter for more sports updates. You can also download the NDTV Cricket app for Android or iOS.