Tottenham Hotspur lost 3-1 at home to Benfica in their first leg of Europa League last 16 tie, while Juventus were held to a 1-1 draw by Italian rivals Fiorentina in Turin in a repeat of the 1990 UEFA Cup final.

Tim Sherwood's prospects of remaining in the Tottenham Hotspur manager's job long-term were not helped as his side lost 3-1 at home to Benfica in their Europa League last 16, first leg on Thursday. Portuguese league leaders Benfica extended their unbeaten run to 24 matches and made it nine consecutive wins in all competitions with a victory that was given to them by a goal from Rodrigo and a Luisao brace, with Christian Eriksen pulling one back for the hosts. 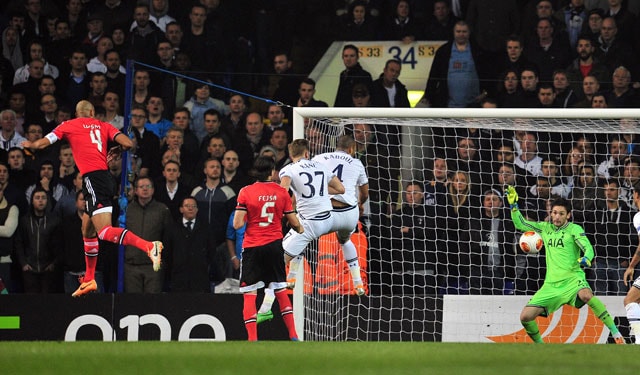 Amid speculation that Spurs will move to bring in experienced Dutchman Louis van Gaal as coach in the summer, Sherwood saw his team suffer a defeat that leaves them in a very difficult position heading into next week's return leg in Lisbon.

The visitors, who lost last season's final to Chelsea in Amsterdam, took the lead half an hour in when Ruben Amorim released Rodrigo with a superb pass in behind the defence, and the Brazilian-born Spanish striker curled a fine finish around goalkeeper Hugo Lloris.

Giant Brazilian defender Luisao then headed in a left-wing corner in the 58th minute, before Eriksen's free-kick from 25 yards raised spirits around White Hart Lane.

However, captain Luisao pounced on a rebound to ram home his second of the night and Benfica's third away goal, leaving the two-time European champions in an ideal position going back to the Estadio da Luz, with Spurs having to score at least three times now to go through.

Elsewhere, Juventus were held to a 1-1 draw by Italian rivals Fiorentina in Turin in a repeat of the 1990 UEFA Cup final. Juve won that tie and also beat La Viola 1-0 in Serie A last weekend, and they opened the scoring on Thursday when Arturo Vidal fired home inside three minutes. 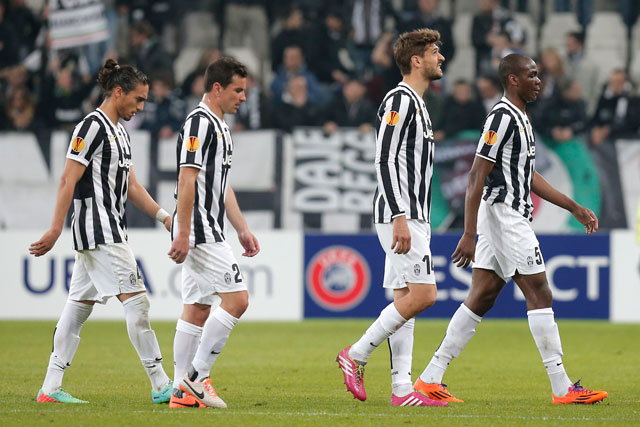 Antonio Conte's side are hoping to go all the way to a final that will be played in their own stadium but Fiorentina are still very much in the tie after Mario Gomez levelled the scores on the night and grabbed a precious away goal in the 79th minute.

There was an upset in the night's other big derby clash in Spain, as Betis won 2-0 away to city neighbours Sevilla at the Sanchez Pizjuan. Betis are bottom of Spain's top flight and lost by four goals on each of their last two visits to their rivals, but Leo Baptistao put them in front from close range after quarter of an hour and the aptly-named Salva Sevilla increased their advantage late on.

Meanwhile, Rafael Benitez's hopes of winning the Europa League for a second consecutive season are in the balance after his Napoli side lost 1-0 away to Porto. Spaniard Benitez, who won the trophy with Chelsea last year and also lifted the UEFA Cup with Valencia in 2004, will hope Napoli can overturn the deficit in next week's return after a second-half Jackson Martinez strike gave Porto the upper hand at the Estadio do Dragao.

Benitez's old club Valencia appear to be all but through to the last eight after an excellent 3-0 win away to Ludogorets Razgrad in Bulgaria. The visitors survived the first-half sending-off of Seydou Keita as goals from Antonio Barragan, Fede Cartabia and Philippe Senderos left the Bulgarians, the surprise package of this season's competition, staring at the exit.

Lyon also have one foot in the last eight after coming from behind to beat Czech champions Viktoria Pilsen 4-1 at the Stade de Gerland, Gueida Fofana scoring twice. AZ Alkmaar of the Netherlands beat Anzhi Makhachkala 1-0, while FC Basel and Salzburg drew 0-0 in Switzerland.