The Kazakhs, ranked 117th in the world, struck twice inside 10 minutes through Yuriy Pertsukh and Yan Vorogovskiy. 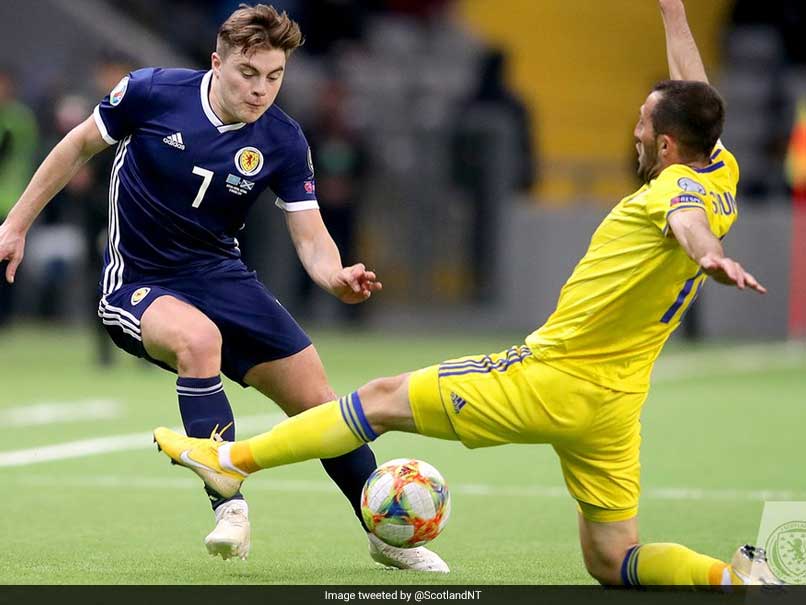 Scotland's Euro 2020 qualifying campaign got off to the worst possible start.© Twitter

Scotland's Euro 2020 qualifying campaign got off to the worst possible start with an embarrassing 0-3 defeat by Kazakhstan in Nursultan on Thursday. The Kazakhs, ranked 117th in the world, struck twice inside 10 minutes through Yuriy Pertsukh and Yan Vorogovskiy to leave an under-strength Scotland shell-shocked. Alex McLeish's men secured the safety net of a playoff to qualify via the Nations League in November and already that looks like their only realistic route to a first major tournament in 22 years as Baktiyar Zainutdinov's terrific header made it 3-0 six minutes into the second half.

Without captain Andy Robertson and the highly-rated Kieran Tierney, McLeish was forced to name Aberdeen skipper Graeme Shinnie in an unfamiliar role at left-back and he was exposed for both the first two goals.

Scotland looked longingly for an offside flag that never came as Pertsukh ran onto a long ball over the top and fired high past the helpless Scott Bain.

The visitors never recovered and Shinnie was caught ball-watching as Vorogovskiy was picked out by Islambek Kuat's pass to slot past Bain again.

But for the Celtic goalkeeper, one of Scotland's worst ever nights could have been more humiliating as Bain tipped over Kuat's dipping drive.

Kazakhstan scored just six goals and failed to win a game in their entire qualifying campaign for the 2018 World Cup.

However, they had half that tally and three points sewn up before the hour mark when Scott McKenna was outjumped by Zainutdinov who directed his header across Bain into the bottom corner.

Scotland were shorn not only of Robertson and Tierney but a host of other regulars due to injury and international retirements, while Ryan Fraser and Charlie Mulgrew were not played in agreement with their clubs due to the plastic surface the match was played on.

However, that will not shield McLeish from seeing his position come under pressure as Scotland failed to even muster a response in the final half hour.

Bouncing back with victory away to San Marino on Sunday is now imperative for Scotland to have any chance of automatic qualification by finishing in the top two from Group I.

But with World Cup semi-finalists Belgium and Russia also in the six-team section, Scotland already have a mountain to climb.

Scotland Football
Get the latest updates on IND vs NZ 2021, check out the Schedule and Live Score . Like us on Facebook or follow us on Twitter for more sports updates. You can also download the NDTV Cricket app for Android or iOS.