Belgium showed their class and no hangover from their exertions in finishing third in Russia to warm-up for their Nations League opener against Iceland. 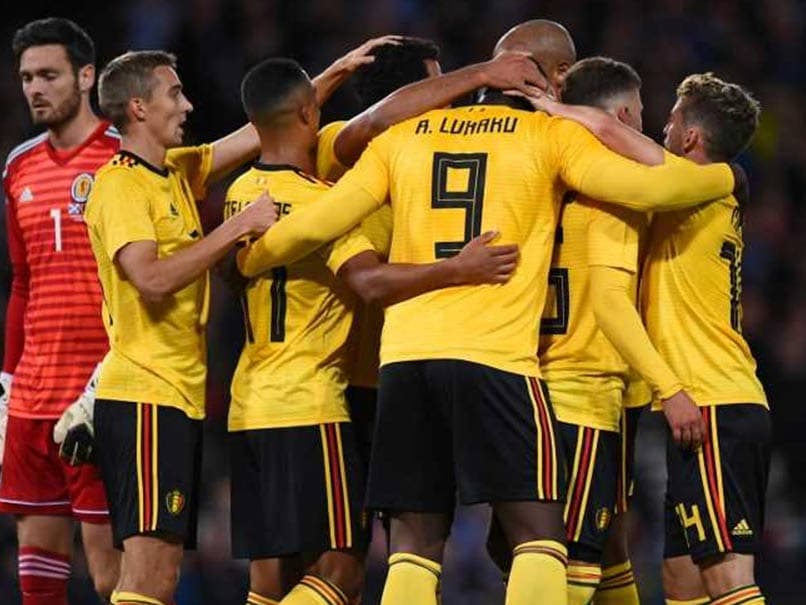 Belgium ran out comfortable winners against Scotland in an international friendly.© AFP

FIFA World Cup 2018 semi-finalists Belgium capitalised on a series of Scotland mistakes with goals from Romelu Lukaku, Eden Hazard and a Michy Batshuayi double to thrash the hosts 4-0 in a friendly at Hampden on Friday. Roberto Martinez's men showed their class and no hangover from their exertions in finishing third in Russia to warm-up for their Nations League opener against Iceland on Tuesday. However, the visitors were handed a series of gifts by a Scotland side that slumped to a fourth defeat in five games since manager Alex McLeish was appointed for a second spell in charge.

"We were very clinical in front of goal," said Martinez. "The players were well focused overall and for us it was a good excercise for Tuesday."

The contrasting fortunes of the two nations was summed up by Belgium playing to a crowd less than that which celebrated their return from Russia in July at a barely half-full Hampden.

Martinez named a strong side with six of those that started the World Cup semi-final defeat to France in the starting line-up.

But it took a gift from Aston Villa's John McGinn to get the visitors going when the midfielder was caught in possession on the edge of his own box and Mousa Dembele and Thorgan Hazard teed up Lukaku for his 41st international goal.

Eden Hazard smashed home Belgium's second a minute into the second-half, but again McLeish might have been disappointed to see goalkeeper Craig Gordon beaten at his near post.

A truer test of McLeish's ability to qualify Scotland for a first major tournament in over 20 years will come when Albania are the visitors to Hampden on Monday in the Nations League.

However, vast improvements will need to be made in possession as Valencia striker Batshuayi scored twice in eight minutes before the hour mark after pouncing on slack passes by Charlie Mulgrew and Ryan Jack.

"It was just a catalogue of errors," said McLeish. "If anybody's got to take the blame, it's me for telling them they have to pass it.

"It's harsh lessons, big lessons for the young ones especially, but they should not be downhearted as they were up against a top team."

However, the former Rangers manager rejected suggestions it was a risk to take on such a tough fixture and the consequences of a morale-sapping defeat just days before kicking off Scotland's Nations League campaign.

"It looked the best choice of opposition for me. We've got to test ourselves," he added.

Romelu Lukaku Eden Hazard Michy Batshuayi Football
Get the latest updates on SA vs IND 2021-22, check out the Schedule and Live Score . Like us on Facebook or follow us on Twitter for more sports updates. You can also download the NDTV Cricket app for Android or iOS.