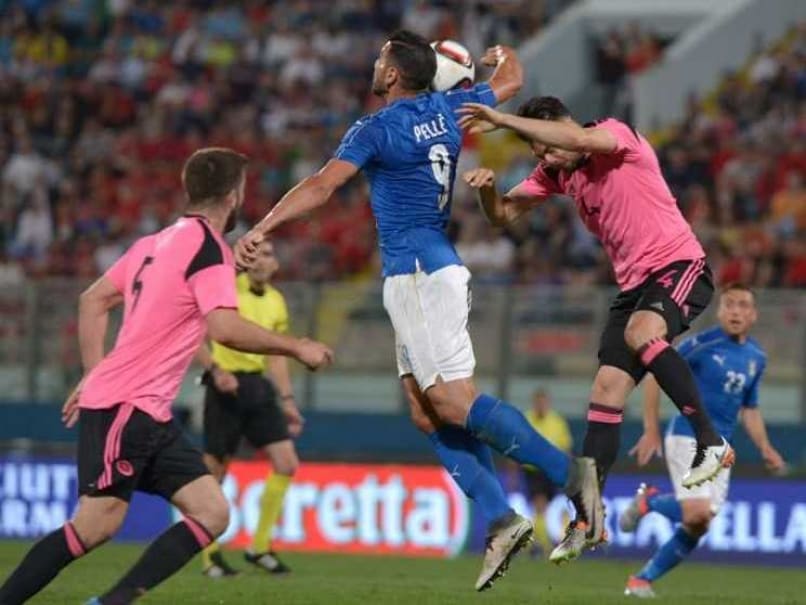 Italy's Graziano Pelle (centre) fights for the ball with Scotland's Russell Martin during an Euro friendly at the National Stadium in Ta'Qali, Malta.© AFP

Southampton striker Graziano Pelle hit a second-half winner as an injury-depleted Italy beat Scotland 1-0 in an Euro 2016 friendly in Malta on Sunday.

With his midfield decimated through injuries to Claudio Marchisio and Marco Verratti, and Thiago Motta and Riccardo Montolivo resting due to calf problems, Italy coach Antonio Conte gave Roma's Daniele De Rossi a chance to impress before announcing his 23-man Euro 2016 squad on Tuesday.

Inter Milan striker Eder was in a similar position, having failed to spark for the Nerazzurri following his move from Sampdoria.

Thankfully for both, Eder and De Rossi were involved when Pelle pounced to beat David Marshall in the 57th minute with a clinical strike from the edge of the area.

But before then, the Azzurri flattered to deceive in a largely messy first half punctuated by three near misses from enterprising Bologna midfielder Emanuele Giaccherini.

After complaining about the state of the "poor" pitch, Conte said: "We put a lot into the match, but the pitch didn't help.

"We're still in construction mode and we're doing it little by little. There's positives but we know there's a lot of work to do."

Giaccherini is expected to travel to France this summer where he could fill in at central midfield, but he said: "We have a lot of great wingers so the coach sees me more in the middle, but I'll play where he asks me to."

"We have quite a few things to iron out but I think we're on the right road. We have to be positive. If we get to France thinking negatively, we'll get nowhere."

Scotland's sole victory over Italy came in 1965 and this was the sides' first meeting since a Euro 2008 qualifier.

Deploying his preferred 3-5-2, Conte saw Italy create chances but he will be disappointed with the lack of return.

Yet he added: "I couldn't fault the lads' commitment and we didn't concede, or give Scotland any real chances."

Giaccherini was wasteful twice more, ballooning over from 12 yards from Candreva's assist and, after the Lazio man's volley flew wide, spinning a great chance beyond post and bar having sprinted behind the defence to meet De Rossi's smart delivery.

Candreva and Roma's Alessandro Florenzi, whose shot fizzed just off target, came close again but it was a frustrating half for the Azzurri.

An early return to the pitch three minutes before kick-off was a sign of Italy's intentions and the hosts visibly moved up a gear before breaking the deadlock.

De Rossi threaded a great ball through for Eder, who did well to hold off his markers and push the ball into the path of Pelle, whose powerful strike gave Marshall no chance.

Conte made a series of changes which likely left Conte with more questions than answers as Italy failed to build on their opener.

Norwich striker Steven Naismith's tame shot went just wide of the upright and although the visitors pushed for a late equaliser, Italy were firmly in command and happy to sit on the win.

Comments
Topics mentioned in this article
Italy Scotland Graziano Pelle Antonio Conte Euro 2016 Football
Get the latest updates on SA vs IND 2021-22, check out the Schedule and Live Score . Like us on Facebook or follow us on Twitter for more sports updates. You can also download the NDTV Cricket app for Android or iOS.