The Netherlands registered a 4-2 win over Germany in Hamburg as the home side failed to pick up a point for the first time in the campaign. 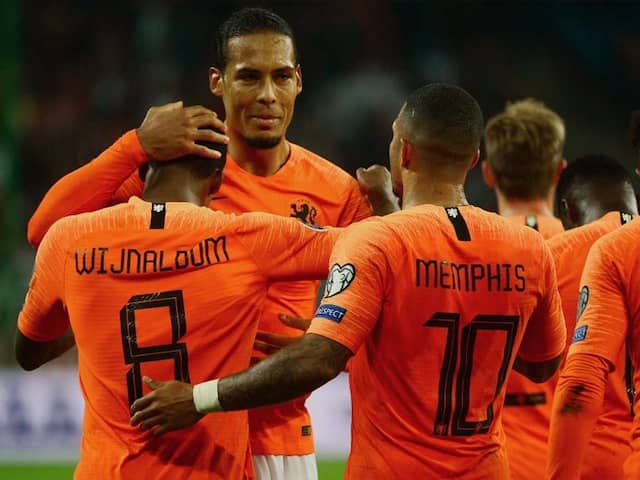 Germany suffered a surprising 2-4 home defeat by the Netherlands in qualifying for Euro 2020.© AFP

Germany suffered a surprising 2-4 home defeat by the Netherlands as FIFA World Cup runners-up Croatia hammered Slovakia in qualifying for Euro 2020 on Friday. Joachim Loew's side lost in Hamburg after debutant Donyell Malen's late effort for the visitors as the home side failed to pick up a point for the first time in the campaign. Serge Gnabry scored for the Germans after nine minutes before new Barcelona signing Frenkie de Jong responded for the Dutch. A Jonathan Tah own goal with less than an hour to play gave the travelling Dutch fans something to cheer about before Toni Kroos equalised from the spot.

"We made some mistakes, which explains the Germans' opener, but we simply did more to get the win," Netherlands head coach Ronald Koeman said.

In Trnava, Croatia retained top spot in Group G with a 4-0 thumping of Slovakia as Nikola Vlasic, Ivan Perisic, Bruno Petkovic and Dejan Lovren all got on the scoresheet.

"Since I have been coach this is one of the best matches of the Croatian national team and that is why I am very pleased," boss Zlatko Dalic, who led his side to the 2018 World Cup final, told HRT Sport.

"There was no chance of us losing this game. We missed a lot of chances in the first half an hour, a little bit of nervousness came in."

Also in that pool, Wales survived a scare to beat lowly Azerbaijan 2-1 thanks to Gareth Bale's 84th-minute header.

'I could have scored four or five'

Elsewhere, Slovenia saw off previously unbeaten Poland 2-0 in Ljubljana despite a strike-force of Robert Lewandowski and Krzysztof Piatek starting for the visitors.

Belgium maintained their perfect start to qualifying, easing past San Marino 4-0 as Michy Batshuayi netted twice, and Scotland's hopes of progression took a blow with a 2-1 loss at home to Russia despite John McGinn's 11th-minute effort.

"On a good day I could have scored four or five goals, but I have not played for a while. The most important thing is that we won," Batshuayi, who has only featured for six minutes for Chelsea this season, told uefa.com.

On Saturday, the pick of the ties sees World Cup winners France host Albania looking to respond after a defeat by Turkey, who welcome Andorra, in June.

Slovakia Virgil Van Dijk Serge Gnabry Georginio Wijnaldum Football
Get the latest Cricket news, check out the India cricket schedule, Cricket live score . Like us on Facebook or follow us on Twitter for more sports updates. You can also download the NDTV Cricket app for Android or iOS.