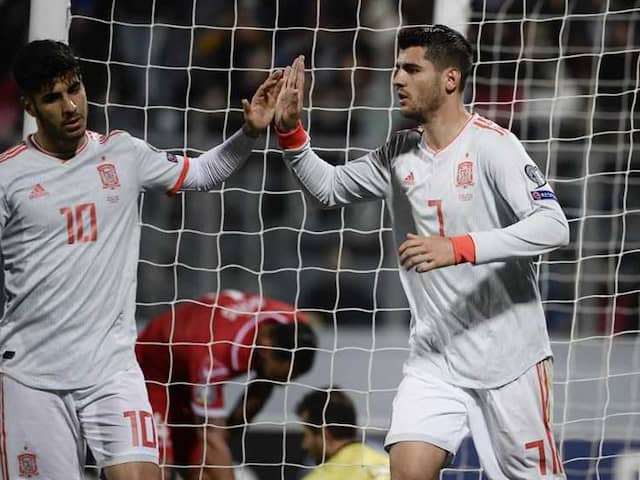 Alvaro Morata's remarkable revival continued on Tuesday as he scored twice for Spain in a 2-0 victory over Malta. After edging past Norway 2-1 on Saturday, Morata's double at the Ta'Qali stadium gives Spain two wins from two in Euro 2020 qualifying and the perfect start in Group F. Luis Enrique's side again showed the inability to convert possession into chances that clouded their early exit from last year's World Cup. But Morata's brace offers room for encouragement, the striker extending his return to form since he joined Atletico Madrid on loan from Chelsea in January.

Alvaro Morata has five goals in six games, his best return since September 2017, and has strengthened his case for a position that has proved so troublesome for Spain in recent years.

"The boss knows how happy I am to be here and I am grateful to him," Morata said. "We want to qualify as soon as possible for the Euros so it was important to win today."

Malta lie 182nd in FIFA's world rankings, between Liechtenstein and Macau. Their win over the Faroe Islands last weekend was their first in 17 matches and only their second in almost four years.

Luis Enrique was absent for "personal reasons", leaving his assistant Robert Moreno in charge on the touchline.

There were unfamiliar faces on the pitch too as only three players - Sergio Ramos, Morata and Marco Asensio - retained their places in a much-changed line-up from the team that beat Norway.

Morata's first, shortly after the half-hour, owed much to Malta's goalkeeper Henry Bonello, who failed to stop the forward's scuffed finish after Hermoso's clipped pass over the top.

Sergi Roberto's cross almost gave Morata his second, only for the glancing header to flash wide, but he did not have long to wait.

Jesus Navas delivered another ball to the back post in the 73rd minute and this time Morata made no mistake.

Spain Malta Álvaro Morata Football
Get the latest Cricket news, check out the India cricket schedule, Cricket live score . Like us on Facebook or follow us on Twitter for more sports updates. You can also download the NDTV Cricket app for Android or iOS.