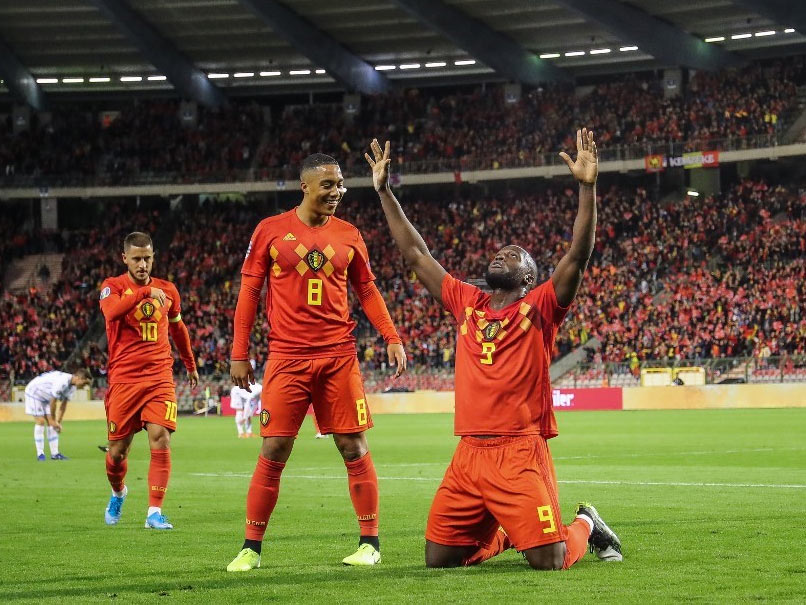 Belgium became the first team to qualify for the 2020 European Championship finals as Romelu Lukaku scored twice in a 9-0 thrashing of San Marino in Brussels on Thursday, while the Netherlands needed a late comeback to beat Northern Ireland. Romelu Lukaku took his record Belgium international tally past 50 goals as Roberto Martinez's Group I leaders opened up an unassailable 11-point lead over third-placed Cyprus with three games remaining in Euro 2020 qualifiers. The world-number-one ranked side booked their spot at Euro 2020, which will be played at 12 venues across Europe, after seven straight qualifying wins.

Russia appear set to take the second automatic slot from the group, after a 4-0 win over Scotland moved them eight points ahead of Cyprus.

Belgium will be one of the favourites as they look to lift a first major international title when the Euros get underway on June 12.

"In my eyes, nine countries have the talent to win the Euro," said coach Martinez. "What will make the difference is how you face adversity. It's necessary to sacrifice yourself for your teammates."

Their victory at the King Badouin Stadium matched their record winning margin of nine goals, having previously beaten Zambia and Gibraltar 9-0 in 1994 and 2017 respectively and hammered San Marino 10-1 in 2001.

"Nine-nil is a good result but we would have loved to have scored one more and broken that all-time record," said Inter Milan striker Lukaku.

The floodgates then opened, as Nacer Chadli slotted into the corner from the edge of the area three minutes later, and visiting defender Cristian Brolli scored a comical own goal 10 minutes before the interval.

Lukaku wasted little time in making it 51 Belgium goals, before Toby Alderweireld and Tielemans made it six before half-time.

The Oranje, bidding to reach a first major finals since finishing third at the 2014 World Cup, are level on points with both Germany and Northern Ireland, who have played a game more, but lead on head-to-head record.

Michael O'Neill's visitors were dreaming of a first-ever away win over the Dutch when substitute Josh Magennis headed them in front with a quarter-hour to play.

But Depay levelled in the 80th minute, and Luuk de Jong bundled the ball home at the back post in the first minute of injury time to deny Northern Ireland a crucial point before Depay grabbed his second.

"We are devastated with the nature of the defeat," O'Neill told Sky Sports. "We have to win our two remaining games, they are very difficult, Netherlands home and Germany away."

Russia sent Scotland tumbling to a fourth straight qualifying defeat which leaves the Nations League playoffs next March as the Scots' only possible route to Euro 2020.

Artem Dzyuba's excellent double and goals from Magomed Ozdoev and Aleksandr Golovin mean Russia will qualify with a draw in Cyprus on Sunday.

Croatia took control of Group E by beating Hungary 3-0 in Split, while Slovakia jumped into second despite being held to a 1-1 home draw by Wales.

Slovakia fell behind in the first half when former lifeguard Kieffer Moore scored on his international competitive debut for Wales, but secured a draw thanks to Juraj Kucka's brilliant 53rd-minute volley.

Elsewhere, Robert Lewandowski netted a hat-trick, taking his tally this season to 18 goals for club and country, as Poland won 3-0 at Latvia to strengthen their position at the top of Group G.

They sit three points clear of closest challengers Austria, who saw off Israel 3-1.

Romelu Lukaku Eden Hazard Football
Get the latest updates on India vs South Africa and check out  Schedule, Results and Live Score. Like us on Facebook or follow us on Twitter for more sports updates. You can also download the NDTV Cricket app for Android or iOS.