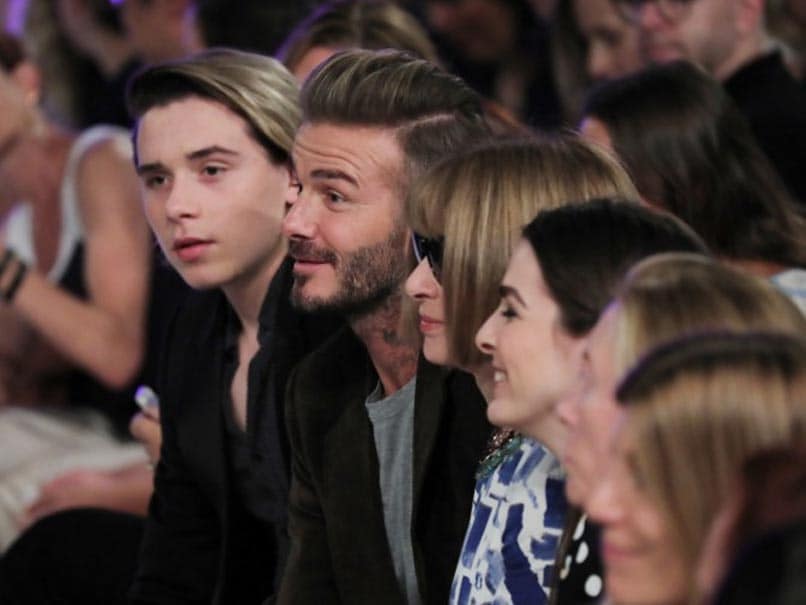 David Beckham's squeaky-clean image as a British cultural icon has taken a battering following the leaking of expletive-strewn emails in which he apparently raged about not receiving a knighthood. The former England football captain is said to have sworn in emails to his PR team after being told he would not be made "Sir David" by Queen Elizabeth II because of concerns about his tax affairs. A spokesman for the 41-year-old said the emails, released by the Football Leaks website, were "hacked and doctored" to give a "deliberately inaccurate picture". But there has been a backlash against Beckham from sections of Britain's tabloid media.

Monday's Daily Mail spoke of the "Shame of Saint Becks", with a columnist pronouncing him "a foul-mouthed, determined egotist" who had used charity work as part of an "increasingly desperate" bid for a knighthood.

Reports which emerged on Friday said the former Manchester United and Real Madrid star refused to put his own money into his humanitarian 7 Fund and tried to obtain reimbursement from the UN children's agency UNICEF for expenses met by his sponsors.

Outspoken television host Piers Morgan told his 5.47 million Twitter followers the revelations were "sickening" and exposed Beckham as a "fraud".

Beckham has not spoken publicly since the story broke, although he was pictured cradling his five-year-old daughter Harper on the Instagram account of his son, Brooklyn.

Cynics said even that was a crass attempt to show his best, fatherly side at a time of bad headlines.

For a man who takes such care of his public image, it is likely to be a deeply distressing situation.

Beckham has maintained a high profile since retiring from the game in May 2013 following a brief stint with French side Paris Saint-Germain.

He continues to carry out charity work and fronts several advertising campaigns.

He has faced problems finding a stadium deal for the football club he plans to launch in Miami, but Major League Soccer chiefs confirmed recently that the team remains in line to become the league's 24th franchise.

He has managed to shake off previous scandals, both on and off the pitch.

He became a national pariah after his dismissal against Argentina was unfairly blamed for England's elimination from the 1998 World Cup, but fought back to become England captain.

Reports of an extra-marital affair in April 2004 were dismissed and did not tarnish Beckham's image as a loving husband to pop star turned fashion designer Victoria Beckham and father to their four children.

Beckham received an OBE from the queen in 2003, a lower honour than a knighthood.

His wife also received an OBE in the 2017 New Year Honours list despite her label being threatened with closure after failing to file company accounts.

She was criticised in British tabloid newspapers for telling her family she would be receiving the award before the official announcement.

Born in Leytonstone, east London, Beckham was a member of the fabled "Class of 92" crop of young players who emerged at United, along with Ryan Giggs, Paul Scholes, Nicky Butt and Gary and Phil Neville.

Blessed with an extraordinarily accurate right foot, Beckham was renowned for his dead-ball prowess and his seemingly limitless stamina, as well as his ever-changing hairstyles.

He won six Premier League titles, two FA Cups and the 1999 Champions League with United, creating both injury-time goals as Alex Ferguson's side stormed back to beat Bayern Munich 2-1 in the final.

After his relationship with Ferguson deteriorated, he joined the Real Madrid "Galacticos" to great fanfare in 2003, but would win only one league title during his time in Spain.

He captained England for six years and played at three World Cups, his 115 caps making him his country's third most-capped player behind Peter Shilton and Wayne Rooney.

"If you had told me as a young boy I would have played for and won trophies with my boyhood club, Manchester United, proudly captained and played for my country over one hundred times, and lined up for some of the biggest clubs in the world, I would have told you it was a fantasy," he said in 2013.

Beckham's global celebrity turned him into a one-man marketing phenomenon with a glut of lucrative endorsements.

He is the face of firms including Adidas, fashion chain H&M and Haig Whisky and his shared fortune with Victoria, dubbed "Brand Beckham", is believed to exceed £500 million ($624 million, 582 million euros).

Comments
Topics mentioned in this article
David Beckham England Real Madrid Manchester United Paris SG Football
Get the latest updates on IPL 2021, IPL Points Table , IPL Schedule 2021 , live score . Like us on Facebook or follow us on Twitter for more sports updates. You can also download the NDTV Cricket app for Android or iOS.