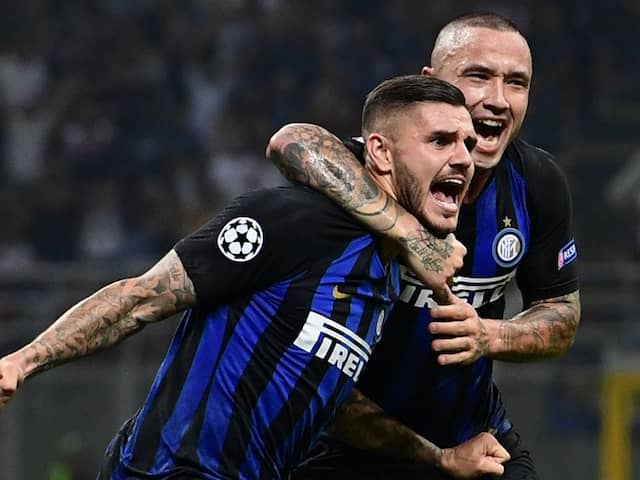 Mauro Icardi scored with a brilliant volley to equalise for Inter Milan vs Tottenham Hotspur.© AFP

A stunning Mauro Icardi volley sparked a thrilling late Inter Milan comeback as the Italian side beat Tottenham 2-1 on their return to the Champions League after a seven-year absence on Tuesday. Christian Eriksen's deflected strike gave Spurs a 53rd-minute lead at the San Siro, and the visitors looked comfortable for much of the second half. But Argentinian striker Icardi hammered home a magnificent volley in the 86th minute to draw Inter level, and Matias Vecino took advantage of some slack Tottenham defending at a corner to nod in a dramatic injury-time winner.

"It was a spectacular evening, we did what we needed to do," said Icardi after his first goal of the season on his Champions League debut.

Inter Milan -- who last won the trophy in 2010 under Jose Mourinho -- were returning to Europe's elite event for the first time since 2011-12, with Tottenham eliminated last season in the knockout rounds by Juventus.

"This is exactly what the fans want to see," said Inter coach Luciano Spalletti.

"Icardi scored a magnificent goal. The team had a great game and really went for it in the end."

The win leaves Inter second in the early Group B table, behind Barcelona on goal difference after the Catalan giants thrashed PSV Eindhoven 4-0 with a Lionel Messi hat-trick.

The late drama was greeted with deafening applause from the 66,000 crowd in the San Siro, who minutes earlier had feared Inter's disastrous start to the Serie A campaign would carry over into Europe.

"We came into this game with quite a few problems," said Spalletti.

"I think that winning in the last minute after turning around the result gives you a lot of enthusiasm and self-belief.

"The reaction is a sign we are on the right path."

Tottenham coach Mauricio Pochettino lamented his side's failure to kill off the game.

Star striker Harry Kane missed an early opportunity to add to his tally of nine goals in his ten previous European games after being served up a clever chipped cross from Eriksen on 38 minutes.

Kane -- the top scorer at the World Cup with six goals -- had only Samir Handanovic to beat, but the England captain rounded the Inter goalkeeper before losing his way as the ball rolled behind for a goal-kick.

"If he had scored maybe we are talking about a different game," said Pochettino.

"We controlled a team like Inter in a difficult stadium. We were unlucky at the end, unlucky not to have achieved the result we deserved, or victory."

Icardi was outside the box when Ghanaian midfielder Kwadwo Asamoah crossed for the skipper to volley in the equaliser for the three-time champions, sparking pandemonium among the home crowd.

"We know we're a strong team and that we can compete against anyone," said Icardi, 25, who has scored 110 Serie A goals, but none this season as he struggled with a muscle problem.

"The environment was ugly in these past few weeks, but a game like this gives us confidence.

"A match like that, in the Champions League, gives you so much, but one game means nothing."

Both teams are faltering in their domestic leagues, with Inter Milan on four points from four games and Tottenham sixth after suffering consecutive defeats.

Pochettino made five changes to the Tottenham side that lost to Liverpool at the weekend with defensive pair Kieran Trippier and Toby Alderweireld left out.

"It's easy to talk about the players who aren't here," snapped Pochettino of his tactical choices.

"Against Watford and Liverpool they were on the pitch.

"That is football. After 46 years loving this game, I understand that some tough periods can arrive.

"After the Manchester United win (in August) I said: 'be careful, be careful, the tough period can arrive' and here it is.

"The important thing is to work harder and to be strong. We have the quality but for different reasons we're a little late in our preparation."

Tottenham Hotspur Mauro Icardi Harry Kane Football
Get the latest Cricket news, check out the India cricket schedule, Cricket live score . Like us on Facebook or follow us on Twitter for more sports updates. You can also download the NDTV Cricket app for Android or iOS.