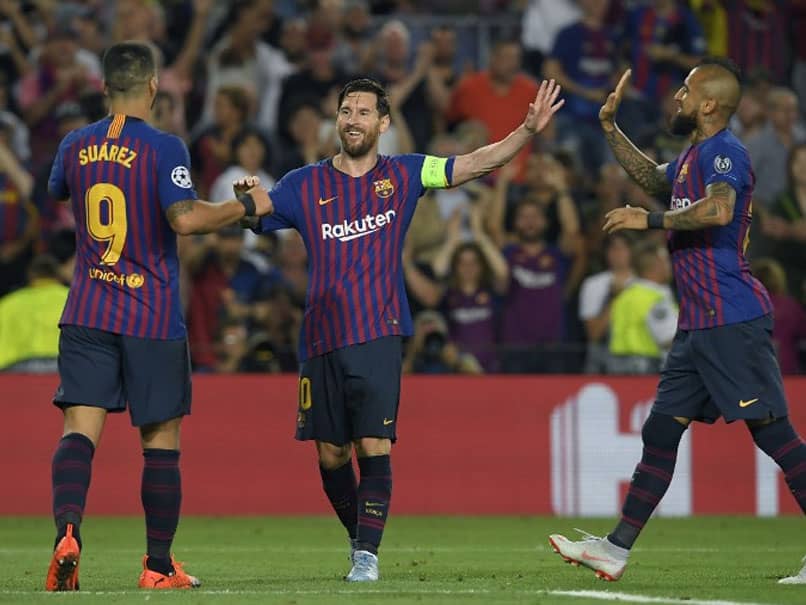 Lionel Messi pictures the Champions League ending with him hoisting the trophy and it began with him scoring a hat-trick on Tuesday as Barcelona put four goals past PSV Eindhoven. An early kick-off at Camp Nou meant that before most of the tournament's teams had even named their line-ups, Messi was up and running, his sumptuous free-kick from the edge of the area nestling in the top corner, exactly where it was intended. Messi would have his second and third before the end, and a record eighth Champions League treble, but the game was up by then thanks to a superb strike from the excellent Ousmane Dembele.

Only when Barca were three ahead was Samuel Umtiti sent off for a second yellow card, meaning he will miss the trip to Wembley to face Tottenham Hotspur next month. Even with 10 men, Messi completed his set for a 4-0 win.

Dembele's goal was worthy of deciding any match but this was Messi's night. After a miserable World Cup trying to retrieve the irretrievable Argentina, Barcelona's now-captain proved his quality again to any doubters that are left.

Four goals already in La Liga, seven overall, neither age nor Cristiano Ronaldo's exit from Spain appear to have taken the edge off.

"Normally if you score a hat-trick you frame it," said Barca coach Ernesto Valverde. "But he makes the extraordinary routine."

Even if Messi remains as good as ever, his team will need others to step up. Philippe Coutinho was impressive here and, after a difficult debut campaign, Dembele is finding his rhythm, and his place.

"Just as there is room for players that pass, there must be others that can make things happen," Valverde said.

The 21-year-old's driving run earned Messi his free-kick while a sizzling shot brought the goal his bustling display deserved.

Perhaps more importantly, this victory was a clean slate for Barcelona.

It was exactly 23 weeks ago that Roma pulled off one of the greatest comebacks ever seen in this competition and sent the club into a depth of disappointment that, in truth, not even winning the double could alleviate.

Instead, Madrid rubbed salt into the wound by making it look easy and winning their third in a row. "It is a thorn in our side," Luis Suarez said. "It's time to win the Champions League," said Messi.

PSV's coach Mark van Bommel knows what it feels like to walk out at the Camp Nou - he had a successful, albeit short, spell playing for Barca - but few of his players did.

Nick Viergever was one of them, for Ajax in 2014, but it was his rash challenge on Dembele in the 31st minute that conceded the free-kick a yard outside the penalty area.

Messi sized it up and sent it spinning away from the hand of Jeroen Zoet and into the top corner. It was his eighth free-kick scored in 2018. He has never scored more in a year.

The contest bristled at the start of the second half. Suarez's delightful chip beat Zoet but not the crossbar. PSV were still in it and could have equalised when Hirving Lozano's finish was blocked, crucially, by Gerard Pique.

Then three goals arrived in 15 minutes. First Dembele, after leaving two PSV midfielders for dead with a dragback, unleashed into the bottom corner. Van Bommel's destructive instincts kicked in. "We should have stopped him," he said.

Messi then latched onto a lob from Ivan Rakitic to slot home before Umtiti was sent off for a cynical block on Lozano.

It made no difference. Suarez set up Messi's third, a brilliant flick allowing his captain the last word, after he had also had the first.

Luis Suarez Ousmane Dembele Football
Get the latest updates on IPL 2021, IPL Points Table , IPL Schedule 2021 , live score . Like us on Facebook or follow us on Twitter for more sports updates. You can also download the NDTV Cricket app for Android or iOS.