Barcelona came from behind to beat Inter Milan in a thrilling Champions League contest at Camp Nou on Wednesday. 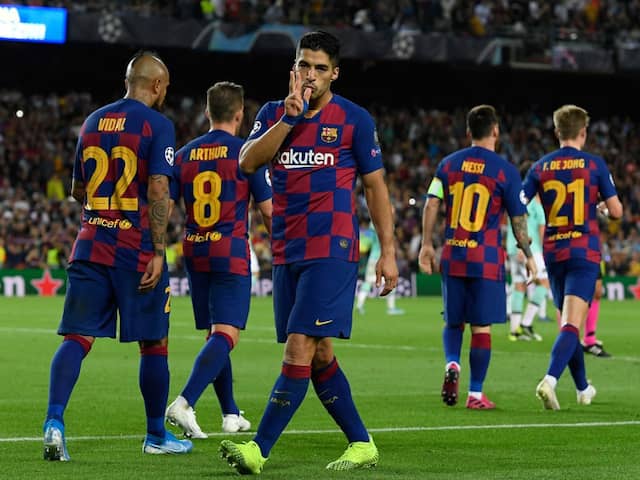 Luis Suarez scored a scintillating double and the returning Lionel Messi set up the winner as Barcelona came from behind to beat Inter Milan in a thrilling contest at Camp Nou on Wednesday. Lautaro Martinez fired Inter ahead after just two minutes and Antonio Conte's side, mean in defence and ruthless on the break, looked capable of pulling off an historic victory in Group F. But Suarez broke down the Italians' determined back-line with a stunning volley just before the hour and then finished off a weaving Messi run in the 84th minute to complete a pulsating 2-1 win.

Inter had never beaten Barcelona away from home in the Champions League but were the better side for long spells, particularly in the first half when they should have added to their one-goal lead.

Instead, Barca's deadly duo came up trumps again, Suarez breaking through just as the hosts looked to be running out of ideas before Messi, back from injury, teed up his partner for the decisive second.

Inter play Juventus at home on Sunday, sitting top of Serie A after winning all of their six games so far and on this evidence, they could go far in Europe too.

Barcelona will be wary of the return fixture at the San Siro in December, which could yet decide who wins this group.

"Those are a big three points," said Suarez. "When you're the number nine, you always try to help the team with goals and assists. Sometimes it doesn't work, but I always work hard. Don't give up in difficult times."

Conte added: "This leaves a bitter taste because we deserved a lot more than we got. But congratulations to Barca, their stars (Suarez and Messi) changed the face of the match."

For Ernesto Valverde's team, a hard-fought victory, combined with Messi's return, will come as a welcome boost to morale and momentum after consecutive victories in La Liga steadied the ship following a bumpy start.

While they had their star striker back for only his second start of the season, Inter were without theirs, Romelu Lukaku ruled out with a thigh strain.

The first half was an engrossing battle of control against counter-attack as Barcelona had 67 per cent of the ball but Inter more of the clear-cut chances.

The pattern was set by Inter scoring early, after 122 seconds, as Gerard Pique was pulled out of position and Martinez sprinted into the gap, holding off Clement Lenglet before finishing inside the far post.

For half an hour, Barcelona played well, switching the ball from one side to the other in an attempt to dislodge the dogged Inter defence.

But the threat of their opponents on the break was always lurking and as the half wore on, Inter looked increasingly likely to grab a second.

Antonio Candreva scored but was ruled offside, Nicolo Barella would have but Nelson Semedo made a last-ditch block while Martinez and Alexis Sanchez both went close, the former drawing an excellent save from Marc-Andre ter Stegen.

By the end, Barca were relieved to reach half-time, even if the whistle on the pitch was greeted by a scattering of whistles in the stands too.

Arturo Vidal replaced Sergio Busquets before the hour and made a difference, meeting an Antoine Griezmann cut-back before feeding Suarez for the equaliser.

Suarez still had a lot to do when the clipped ball came over to him on the edge of the box but the Uruguayan caught it perfectly in the air with his right foot and sent it flying into the net.

Barca wanted a winner. Vidal found Messi, who slid in Griezmann but he could only find the side-netting. Griezmann was replaced by Ousmane Dembele, who fired over.

The game looked to be drifting towards a draw until Messi intervened. Collecting the ball on the right, he span around one defender, then jinked inside another before passing to Suarez, whose first touch pushed the ball perfectly into the area. From there, the finish was simple.