"The Next Messi?": Alex Collado Scores Breathtaking Goal For Barcelona B Team. Watch

Alex Collado, 20, came up with a goal that would make Lionel Messi proud, during a Barcelona B team match. 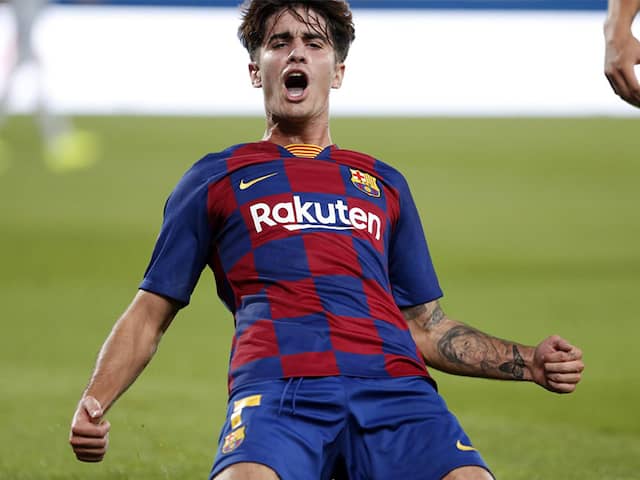 Alex Collado scored a sensational goal for Barcelona B vs Atletico Levante.© Twitter

Lionel Messi's start to the new season has been blighted by injuries and that has had a direct effect on Barcelona's performance in La Liga as well as the Champions League. Before their wins over Villarreal and Getafe respectively, Barcelona had suffered a humbling 0-2 loss at newly-promoted Granada -- a result that left them with seven points from five games, their worst start to a season since 1995. The Catalan giants' latest bid for success in Europe also got off to an underwhelming start after a goalless draw against Borussia Dortmund in the Champions League. However, it's not all doom and gloom for the Spanish giants and life after Lionel Messi might not be as bad as some might have thought.

If Alex Collado's goal for Barcelona's B team is anything to go by, then the Catalan giants have another gem on their books.

The 20-year-old Spaniard, playing for Barcelona B, scored an absolute wonder goal for his team against Atletico Levante.

Abel Ruiz had scored the first goal of the match in the 69th minute but what came after was nothing short of breathtaking.

Alex Collado zigzagged and nutmegged his way past the first defender before an exquisite piece of skill took him past another two and to cap it all off, the youngster put the cherry on the cake with a silky smooth backheel finish.

The result was a first win at the Johan Cruyff Stadium for Barcelona B.

The video of the goal was shared by Barcelona B's official Twitter handle, and quickly went viral.

Fans went into meltdown and were left wondering, if they were seeing the next Messi in action.

One of the goals of the weekend scored by Alex Collado for Barcelona Bpic.twitter.com/XzCQhmPCxs

Barca have found their new Messi... look at this kid! https://t.co/OPi0rSozXc

The original Messi, however, is not having the best of times. On Tuesday, the Argentine star endured yet more injury frustration after going off at half-time against Villarreal.

His withdrawal will be a major concern for Barcelona, particularly given this was Messi's first start of the season after just recovering from a niggling calf injury sustained at the start of August.