Barcelona kept the pressure on Real Madrid ahead of their derby with Atletico Madrid on Saturday. 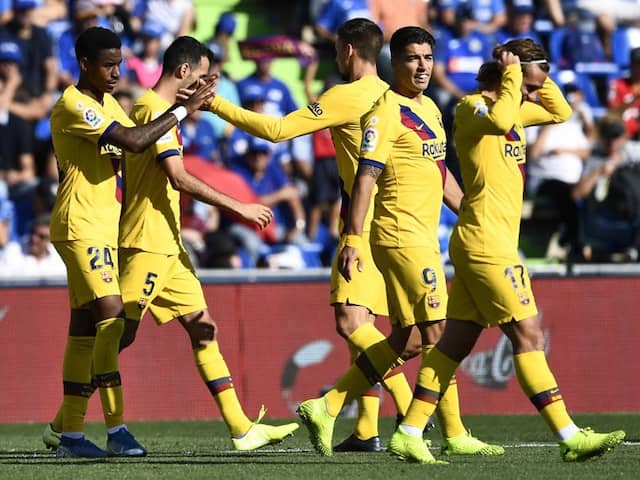 Barcelona kept the pressure on Real Madrid ahead of their derby with Atletico Madrid on Saturday with a hard-fought 2-0 win at Getafe that moved them to within a point of the La Liga leaders. Their first win away from home since April puts Ernesto Valverde's side, who finished with 10 men with Clement Lenglet's late red card, temporarily level on 13 points with Atletico and Real Sociedad as Diego Simeone's side attempt to snatch top spot from their local rivals later.

"This match was crucial for us to rid ourselves of the sensation of never being able to win away," said Valverde.

"We knew that we were going to play at a very demanding ground in hot conditions, on a pitch where the ball doesn't zip much and against a tough opponent that stops you from playing.

"We didn't play well in the first half but once we took the lead they basically didn't have any chances."

A remarkable counter-attack goal launched by Marc-Andre Ter Stegen and finished off by Luis Suarez put Barca on their way four minutes before the break, and Junior's tap-in shortly after the restart made sure of the three points.

Ter Stegen is embroiled in a row with Bayern Munich captain Manuel Neuer over the Barca stopper's lack of opportunities with the Germany team.

However he showed his class when he raced out of his goal to stop a Getafe attack before launching a pin-point pass over the home side's dozing defence to Suarez, who calmly lobbed the opener over David Soria.

"Sometimes when passes come off like this the goalkeeper is just clearing the ball. I don't know if that is the case here, but regardless he brings us a lot," added Valverde.

The win was Barca's second in a week as they attempt to recover from an miserable start that led to questions surrounding Valverde's future.

Earlier Athletic Bilbao lost for the first time this season at home to crisis club Valencia, who bagged their second win of the season thanks to Denis Cheryshev's 27th minute strike.

'Los Che' had been sent into turmoil when owner Peter Lim sacked Marcelino Garcia Toral earlier in the month.

But despite player and fan anger at Lim's decision, two draws and now a win after their shock victory at Chelsea in the Champions League have them in ninth on nine points.