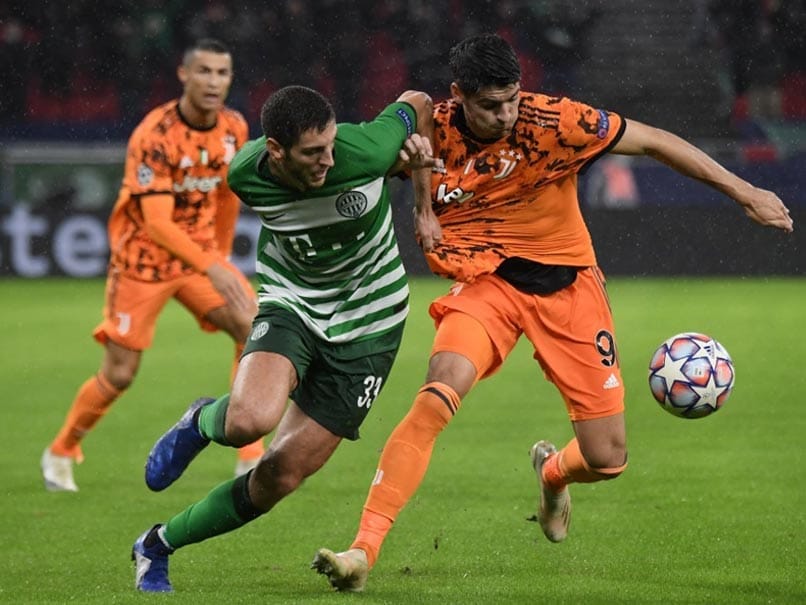 Another double strike by Alvaro Morata propelled Juventus to a 4-1 win against Hungarian minnows Ferencvaros as Cristiano Ronaldo returned from coronavirus for his first Champions League game this season. The Spaniard struck in each half, repeating his double haul against Dynamo Kiev in the Group G opener, with a late Paulo Dybala tap-in and an own-goal by Lasha Dvali easing Juventus past their hosts in Budapest. "I feel good, I have everything I need here at Juve," said Morata.

"Everything I've experienced during my career, the good and the bad, has helped me to become a better player," he said.

In heavy rain, Juventus opened their account on seven minutes when Leonardo Bonucci split the home defence to send Juan Cuadrado dashing down the right wing.

The lively Colombian fizzed a low cross across the goalmouth for the onrushing Morata to fire home from close range.

Backed by over 20,000 home fans in the vast Puskas Arena Ferencvaros responded gamely to the opener but squandered several chances to equalise midway through the half.

Approaching half-time Andrea Pirlo's side should have gone two-up but Morata, sent clear on goal, opted to lay off to Ronaldo, whose effort was blocked by the lunging Miha Blazic.

Ronaldo, who tried hard throughout without scoring, had been Covid-positive for 19 days after a test while on international duty with Portugal, missing four games and returning to Serie A action last Sunday.

The Portuguese captain could have extended the lead ten minutes after the break after seizing on a defensive slip but pulled his shot across goal.

On the hour Ronaldo turned provider, his cross from the right dummied by substitute Weston McKennie to reach Morata who had space to curl a right-footer past the helpless Denes Dibusz.

The Hungarian international's night got worse on 72 minutes when he fumbled a back-pass allowing Dybala to tap in and seal the Italian side's win.

Ten minutes from the end the Argentinian pounced on another lapse at the back, pressuring the Georgian international Dvali to turn it into his own net.

Ivorian striker Franck Boli grabbed a consolation for the battling but inexperienced Hungarians just before the final whistle.

"We are satisfied with the result, but we could have played much better," said Pirlo.

"We made many mistakes, maybe because we relaxed a bit when the result was already secured. We are happy with the win, but we still have to improve," he said.

"Games can become easy only if you play well," said Juventus skipper Giorgio Chiellini who returned to defence after a thigh injury kept him out of action for much of last month.

"In the first half we were a bit slow with possession, we raised our tempo in the second half and we managed to earn another important win," said the veteran defender.

Juventus, who topped their Champions League section in the last two seasons, now have six points behind group leaders Barcelona on nine points after three games.

The next game for the Bianconeri is the return fixture against Ferencvaros in Turin on November 24.

Cristiano Ronaldo Álvaro Morata Juan Cuadrado Paulo Dybala Football
Get the latest updates on ICC T20 Worldcup 2022, check out the Schedule and Live Score. Like us on Facebook or follow us on Twitter for more sports updates. You can also download the NDTV Cricket app for Android or iOS.