Champions League: Barcelona are top of Group G with six points after two games with Juventus on three. The reverse fixture takes place at the Camp Nou on December 8. 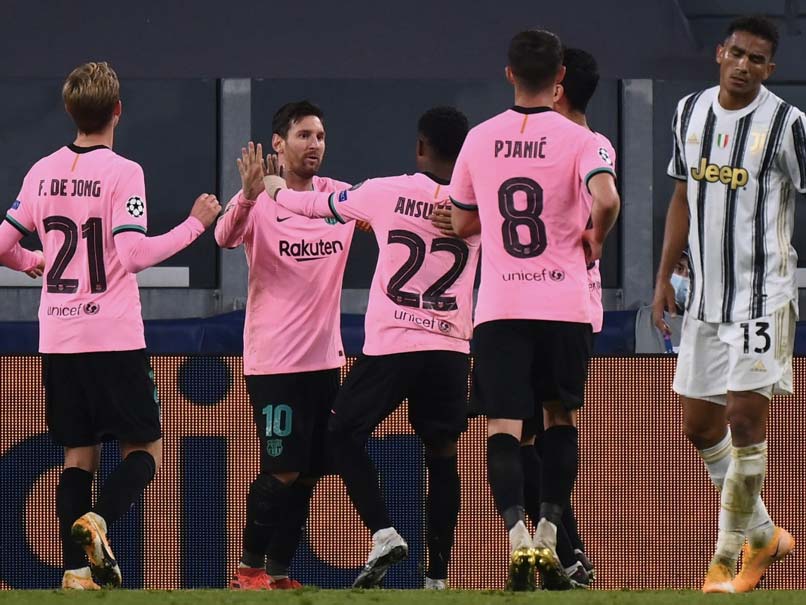 Cristiano Ronaldo missed Juventus' Champions League clash against Lionel Messi's Barcelona, two weeks after testing positive for coronavirus, with the Italian giants losing 2-0 at home on Wednesday in his absence. Messi, 33, set up Ousmane Dembele to put Barca in front after quarter of an hour in Turin, adding a second himself from the penalty spot in stoppage time. Alvaro Morata had three goals ruled out for offside for Juve who played the final five minutes a man down after Merih Demiral was sent off for a second yellow card.

Barcelona are top of Group G with six points after two games with Juventus on three. The reverse fixture takes place at the Camp Nou on December 8.

"This was our best game all season," said Barcelona coach Ronald Koeman.

"This is a big win against an important European side and we were able to play the football we're trying to impose.

"I'm very happy with the game and the character displayed by the team, it is a great victory."

It was a first defeat for new Juventus coach Andrea Pirlo whose last game as a player for the Turin giants was a loss to Barcelona in the 2015 Champions League final.

"We knew it would be a difficult game, they are further along the path, they have players more experienced in these games, while we are under construction," said Pirlo.

"We need to grow. I hope to have the other players back soon.

"I have no other solutions, those who play have to stay 90 minutes, so it's difficult when there are matches close together."

The 35-year-old Ronaldo, the top scorer in the history of the competition with 130 goals, was furious at missing the game.

The Portuguese superstar had needed to test negative 24 hours before the game to take part in his sixth Champions League meeting against Argentine Messi.

Ronaldo then posted a video of himself wearing the Juventus jersey running on a treadmill in his home gym, jumping off for his usual goal celebration before giving the thumbs up and wishing his teammates 'good luck'.

Ronaldo first tested positive for Covid-19 on October 13 while playing with Portugal, and has been in self-isolation since returning to Italy.

He has reportedly tested positive 18 times.

The loss could have been heavier for Juve as under-pressure Koeman's side bounced back after a 3-1 defeat against Real Madrid at the weekend followed a 1-0 loss to Getafe.

Barcelona president Josep Maria Bartomeu also resigned on Tuesday along with his board of directors, following mounting pressure from fans and his public falling out with six-time Ballon d'Or winner Messi.

"After the defeat against Real Madrid it was important to get off to a good start," said defender Sergi Roberto.

"We're delighted, there are only two goals' difference but it could have been a lot more. We dominated, we created chances."

Barcelona were firing on all cylinders with three early chances.

Leonardo Bonucci closed down Messi with Wojciech Szczesny punching out a strike from former Juventus midfielder Miralem Pjanic and an Antoine Griezmann follow-up hitting the post.

The breakthrough came when Messi pinged a sublime cross-field ball for Dembele who ran at two defenders before his long-range strike deflected off Federico Chiesa and looped in over Szczesny.

Morata had the ball in the net just after but the goal was ruled offside after a VAR viewing, with Messi sending the ball wide after 23 minutes off a Griezmann back-heel flick.

Morata latched onto a Juan Cuadrado cross to turn home after half an hour, but again he was ruled offside. A VAR review then denied him for a third time on 55 minutes.

Juventus saw Demiral dismissed in the closing minutes, and Messi sealed victory from the spot following a foul by Federico Bernardeschi on Ansu Fati for his 117th Champions League goal.

Cristiano Ronaldo Ousmane Dembele Football
Get the latest updates on ICC T20 Worldcup 2022 and CWG 2022 check out the Schedule, Live Score and Medals Tally. Like us on Facebook or follow us on Twitter for more sports updates. You can also download the NDTV Cricket app for Android or iOS.