Against first-time finalists PSG, Bayern were worthy winners of their sixth European Cup, their third in the Champions League era. 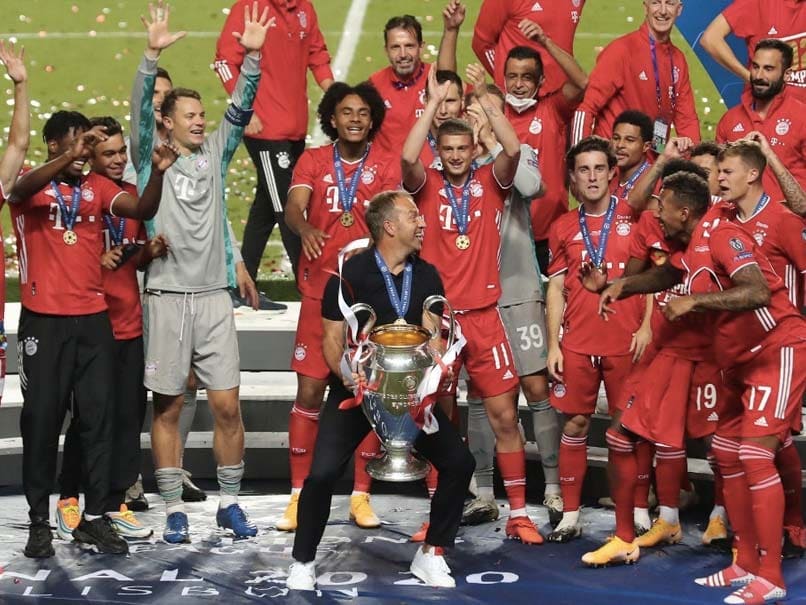 It will be remembered as the strangest of Champions League seasons but it has ended with a familiar name on the trophy after Bayern Munich got the better of Paris Saint-Germain in Sunday's final in Lisbon, with their deserved success the result of the remarkable job done by coach Hansi Flick. There was tickertape at the trophy ceremony and the usual celebratory songs playing over the loudspeakers at the Estadio da Luz as the Bayern players savoured the moment after Kingsley Coman's goal saw them defeat PSG 1-0.

But it was a bizarre spectacle with the 65,000-seat stadium empty, supporters having been barred from attending the biggest match in club football.

The coronavirus pandemic killed the Champions League as we know it, at least temporarily, and UEFA was forced to come up with a new 'Final Eight' format in order to make sure its flagship competition was completed.

UEFA president Aleksander Ceferin told AFP in an interview in Lisbon that the format was likely to be a one-off, and some will be tempted to say that this Champions League should always have an asterisk next to it.

But, against first-time finalists PSG, Bayern were worthy winners of their sixth European Cup, their third in the Champions League era.

They won all their 11 Champions League matches this season, an unprecedented feat.

They scored 43 goals in that time on a run that included a 7-2 win at Tottenham Hotspur and the stunning 8-2 demolition of Barcelona in the quarter-finals in Lisbon.

They just had the better of the final, even if they were fortunate at times up against the French side's formidable attack of Neymar, Kylian Mbappe and Angel Di Maria.

But this was also about the new faces, such as 19-year-old left-back Alphonso Davies, the Canadian international.

"Moments like these you dream of as a kid," he told DAZN. "I honestly can't believe it, winning the Champions League is the top level."

A year ago Bayern were dumped out by Liverpool, the eventual winners, in the last 16, and under Niko Kovac looked a long way off being contenders to win the trophy again.

But Flick replaced Kovac in November, initially as caretaker, and has gone on to win a treble.

"It's such a huge joy, it feels like we have come a long way since November," said Mueller, a player reborn under Flick.

"I don't know how it looked from outside, but it felt like we deserved it in the way we played."

As for changing coach mid-season, it is a formula that has worked for clubs at this level in the recent past.

Flick is the third coach in the last decade to win the Champions League having being appointed during a campaign, after Roberto di Matteo with Chelsea in 2011/12 and Zinedine Zidane with Real Madrid in 2015/16.

Zidane went on to win the next two as well.

'Not the football we know'

It is unknown how Bayern will fare next season, which is just around the corner, with the Bundesliga starting on September 18 and the Champions League group stage in October.

They will be a formidable force again, but so will their rivals, including PSG, who need not be too downbeat in defeat.

"Over the last few weeks we have shown everything you need to win every title going," said PSG coach Thomas Tuchel.

"We lost 1-0 in the final against one of the strongest sides in Europe. We must maintain the same quality to carry on this road."

The format of one-off matches in the quarter-finals and semi-finals maybe helped PSG more than anybody else, given their struggles in knockout ties in recent years.

But, as long as the health crisis does not worsen again, the Champions League will return to normal in the new campaign, and that includes seeing at least some fans return to stadiums.

Istanbul is in line to host the 2021 final, having had this season's showpiece taken away, and hopefully the winning team will be able to celebrate with their supporters.

As Flick said: "It's a pity that the fans couldn't be here with us today. Perhaps they can be back again in the future. A game like this without supporters is not the football that we know."

Bayern München Kingsley Coman Neymar Kylian Mbappe Football
Get the latest updates on India vs South Africa and check out  Schedule, Results and Live Score. Like us on Facebook or follow us on Twitter for more sports updates. You can also download the NDTV Cricket app for Android or iOS.