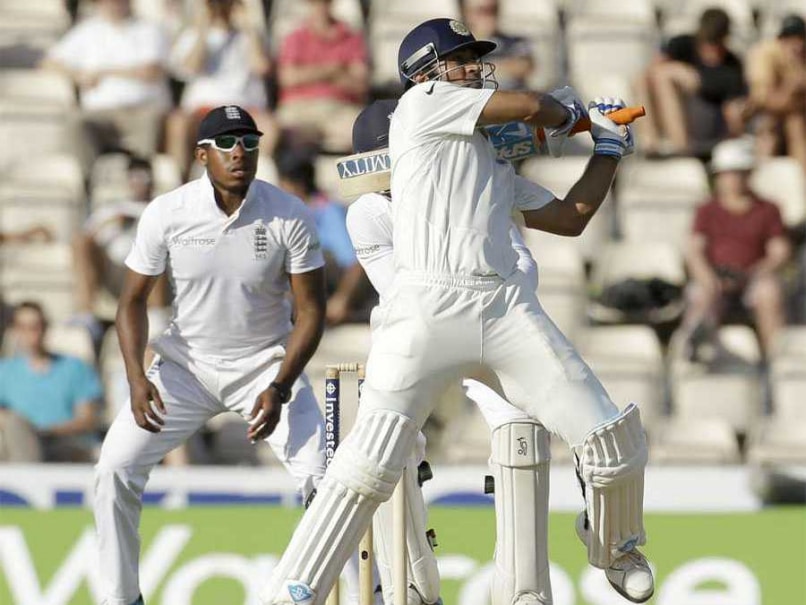 Dhoni 'flew' past Brian Lara of the West Indies, who had scored 49 boundary sixes while captaining the Caribbeans Â© AP

Mahendra Singh Dhoni was the lone man standing when English bowlers tormented India on Day 3 of the Southampton Test on Tuesday.Â  The Indian captain struck a patient unbeaten 50 and will resume with Mohammed Shami (four) on Wednesday morning as India look to scrape past the follow-on mark of 370. (Southampton Test, Day 3 Highlights)

James Anderson and Stuart Broad each took three wickets to leave India in trouble on 323 for eight, 246 runs adrift of England, after the third day of the third test on Tuesday. (Broad proud to be part of 'exclusive Test club')

En route to his gritty innings, Dhoni became the first captain ever to score fifty sixes in the annals of Test cricket when he smote England off-spinner Moeen Ali over the midwicket boundary (fourth delivery of 98th over).

Dhoni 'flew' past Brian Lara of the West Indies, who had scored 49 sixes while captaining the Caribbeans. Clive Lloyd (48), Vivian Richard (46) and Ricky Ponting (37) are next best.

Dhoni's lone six off Kiwi pacer Tim Southee in his knock of 68 in India's first innings in the second Test against New Zealand at Wellington had given him his 49th six while leading India.

Dhoni had to wait for four more Tests to earn the record of becoming the first Test captain to score 50 boundary sixes. Dhoni has scored his 50 sixes off both spinners and fast bowlers. Interestingly, Australian bowlers have been clubbed for sixes by the Indian captain, whose batting technique is not quite copy book.

On October 17, 2008, Aussie pacer Peter Siddle was hit for a couple sixes in Mohali when Dhoni scored 92. Cameron White also received a similar treatment. Dhoni has been more aggressive against spinners. Almost all world spinners have been hit for sixes. Prominent among them being Daniel Vettori (NZ), Muralitharan and Rangana Herath (Sri Lanka), Monty Panesar (England) and Nathan Lyon (Australia)

In Southampton on Tuesday, Dhoni, as Test wicketkeeper, scored his sixth fifty in 18 innings in England.Â  His tally is bettered only by South Africa's John Waite -- seven in 27 innings. Aussie legend Rodney Marsh also scored six fifties in 35 innings in England.

Comments
Topics mentioned in this article
MS Dhoni Eng vs Ind, 2014 India Cricket Team England Cricket Team Cricket
Get the latest updates on T20 World Cup, check out the T20 World Cup Schedule and Live Score . Like us on Facebook or follow us on Twitter for more sports updates. You can also download the NDTV Cricket app for Android or iOS.