Jason Roy, the top-scorer in the Natwest t20 Blast was named in England's 14-member squad. The one-off T20 international between India and England will be played at Edgbaston on September 7. 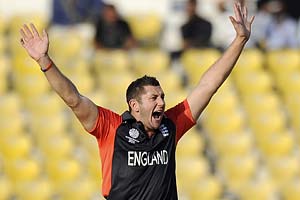 The England selectors on Sunday decided to bring back experienced pacer Tim Bresnan in the national squad for the one-off T20 International against India at Edgbaston on September 7. (Also read: Cook wants more from England batsmen)

The 14-member squad also features uncapped Surrey opener Jason Roy, who has been rewarded for his good show in the Natwest T20 championship, where he blasted 58 off 25 balls against Warwickshire in the semi-finals. (Also read: Kohli, Stokes involved in verbal spat)

James Taylor, who has played a couple of Tests and ODIs was also included in the wake of some good performances in the then county circuit.

Bresnan, last played for England against Netherlands in a World T20 match at Chittagong and will be making a comeback after five months. He has had some good performances in List A matches for Yorkshire.

Ravi Bopara, who was dropped from the ODI side also makes a return in the shortest format.

Comments
Topics mentioned in this article
Eng vs Ind, 2014 Tim Bresnan India Cricket Team England Cricket Team Cricket
Get the latest updates on SA vs IND 2021-22, check out the Schedule and Live Score . Like us on Facebook or follow us on Twitter for more sports updates. You can also download the NDTV Cricket app for Android or iOS.