India Searching for Bowling Answers Ahead of Derbyshire Game

Mahendra Singh Dhoni and company may have had decent batting practice in the rain-marred game in Leicester before the first of the five Tests kickstarts July 9 but bowling seemed to be an area of concern for the visitors. 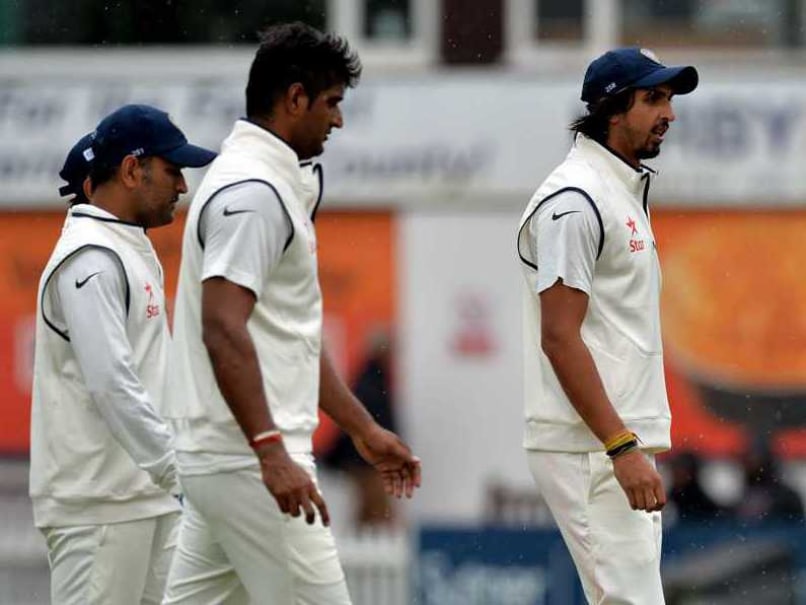 India's Ishant Sharma (R) leaves the field as rain stops play on the third day of the cricket Tour Match between Leicestershire and India at Grace Road in Leicester, central England on June 28, 2014.© AFP
Derbyshire:

After a not-so-satisfactory first practice game against Leicestershire, India are still searching for answers when they take on Derbyshire in their second three-day tour match startingÂ  on Tuesday.

Mahendra Singh Dhoni and company may have had decent batting practice in the rain-marred game in Leicester before the first of the five Tests kickstarts July 9 but bowling seemed to be an area of concern for the visitors. (Also read: Kohli says he doesn't need to prove anything)

With India trying out all their 18 players in a match that was not accorded First-class status, the bowling line-up leaked runs aplenty as the bottom-placed Division 2 County side amassed 349 for five in reply to the visitor's score of 333 for four. (Also read: Zaheer Khan wants Ishant Sharma to shoulder attack)

The visitors tried out all their 18 players in the match and hence it wasn't accorded First-Class status. While it proved a good chance for the players to shake off their rust and get accustomed to English conditions, the results obtained were just about satisfactory at best.

Day one belonged to the batsman, the second day was taken away by the rain while on the third day, many of the young Leicester batsmen gave the Indian bowlers a bitter lesson.

Ishant will certainly have to pull up his socks and show his mettle just like he did against New Zealand. His temperament more than ability will be put to test in English conditions.

It is most likely that, Dhoni will field all his 18 players once again, thus theoretically giving everyone a chance to bid for the playing eleven in the first Test.

But there are only a few spots up for grabs -- almost the entire batting line-up picks itself with only a couple headaches -- while the entire attack composition is probably yet to be finalised.

Dhoni has five medium pacers to choose from other than Ishant. It was telling that Pankaj Singh opened the bowling along with Bhuvneshwar Kumar, bowled a second spell too unlike any other medium pacer out there, and ended up being India's best bowler in Leicester.

Shami is India's current leading bowler and Varun Aaron worked up decent pace. Then there is always Ishwar Pandey to look at as well, someone who has been gradually prepared for international cricket. This game could well be a shoot-out for three spots in the bowling attack.

The batsmen fared much better with the top order spending valuable time in the middle but Rahul Dravid -- added as batting mentor for the Test matches -- will certainly add something to the arsenal.

Like the previous game, India's next opponents too haven't fared well in the County Championship this season, struggling in division two. But with the visitors trying out various permutations and combinations, Derbyshire will look to put a spanner in India's works.

More importantly, the weather forecast is only of isolated showers through the three days.

Comments
Topics mentioned in this article
Eng vs Ind, 2014 Cricket
Get the latest updates on ICC Women's Cricket World Cup 2022 and IPL 2022, check out the Schedule , Live Score and IPL Points Table. Like us on Facebook or follow us on Twitter for more sports updates. You can also download the NDTV Cricket app for Android or iOS.