India in England: Eoin Morgan Glad to Bring Smiles Back After T20 Win

Captain Eoin Morgan hit a fifty to help England win the one-off T20 against India. This after India had won the ODIs 3-1. 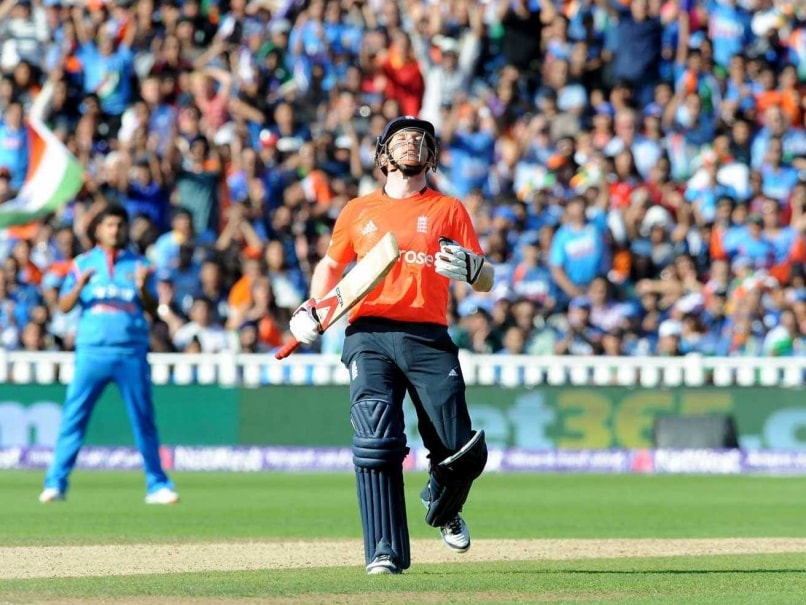 Stand-in skipper Eoin Morgan said he hoped England's thrilling three-run Twenty20 win over India in their final home international match of the season would spur the team on to greater heights ahead of the World Cup.

Morgan, leading the side in the absence of injured all-rounder Stuart Broad, produced a stunning captain's innings of 71 in just 31 balls, including seven sixes, as England made 180 for seven at Birmingham's Edgbaston on Sunday.

He then saw his 'death' bowlers, put paid to what threatened to be yet another victorious rescue act by India captain Mahendra Singh Dhoni, who narrowly fell short in trying to score the 17 his side needed off the last over, delivered by paceman Chris Woakes on his Warwickshire home ground.

Having lost series in all formats to Sri Lanka earlier in the season, England -- after a poor start -- recovered to beat India 3-1 in a five-Test campaign.

However, doubts about their viability as contenders to win next year's World Cup in Australia and New Zealand resurfaced during a 3-1 one-day international series defeat by reigning champions India.

Morgan, tipped in some quarters as an alternative England ODI skipper to incumbent Alastair Cook, struggled for runs in the one-dayers but found his form on Sunday.

"There's smiles in the changing-room after a very tough summer," Morgan said.

"We've worked really hard and to finish it on such a high against such a very strong T20 team -- is a great achievement.

"It is hugely important. In the one-day series our senior players including myself didn't stand up, which made things really difficult.

"To lead from the front myself was the way it should be done."

India regained control with the bat while Virat Kohli was making 66 -- his only international fifty of a disappointing tour.

When he holed out off a bouncer from fast bowler Steven Finn, India needed 46 off the final 30 balls.

It looked a gettable target but when left-arm seamer Harry Gurney bowled Suresh Rains with a yorker, England sensed a chance of victory.

Woakes then held his nerve despite the pressure of bowling to dangerman Dhoni in front of a capacity crowd, most of whom were cheering for India.

"The guys at the end; Woakesy and Harry Gurney and Steven Finn were outstanding," said Morgan.

Dhoni turned down singles late on, including in the final over, but Morgan defended his opposing skipper's approach.

"He's a guy capable of anything. That first ball (of the last over) Woakesy bowled, he probably missed his length but not by much at all -- he inside edged it for six.

"If Woakesy half executes the rest of the deliveries he faces in that over they could have gone for six as well."

One sour note was that England's Moeen Ali, Birmingham-born but of Pakistani descent and a practising Muslim, was repeatedly booed by large sections of the crowd.

The jeers appeared to be aimed at Ali for who he was rather than anything the off-spinning all-rounder had done.

Morgan insisted he was unaware that Ali, who came through Warwickshire's youth system but now plays for Worcestershire, had been targeted specifically: "I didn't know he (Ali) got booed. We all got booed today (Sunday)."

Meanwhile Dhoni, recalling how India's Ravindra Jadeja had been subjected to crowd taunts as a result of his dust-up with England paceman James Anderson during the first Test at Trent Bridge, also refused to be drawn on the issue.

"Did you ever ask about Jadeja getting booed?," Dhoni told a reporter at a post-match news conference.

"The last day of the tour, I don't want to start another controversy."

Comments
Topics mentioned in this article
India Cricket Team England Cricket Team Eoin Morgan Eng vs Ind, 2014 Cricket
Get the latest updates on IND vs NZ 2021, check out the Schedule and Live Score . Like us on Facebook or follow us on Twitter for more sports updates. You can also download the NDTV Cricket app for Android or iOS.