Matt Prior, 32, said he needed time off to treat injuries, including an Achilles problem that will need surgery, which has affected his form. 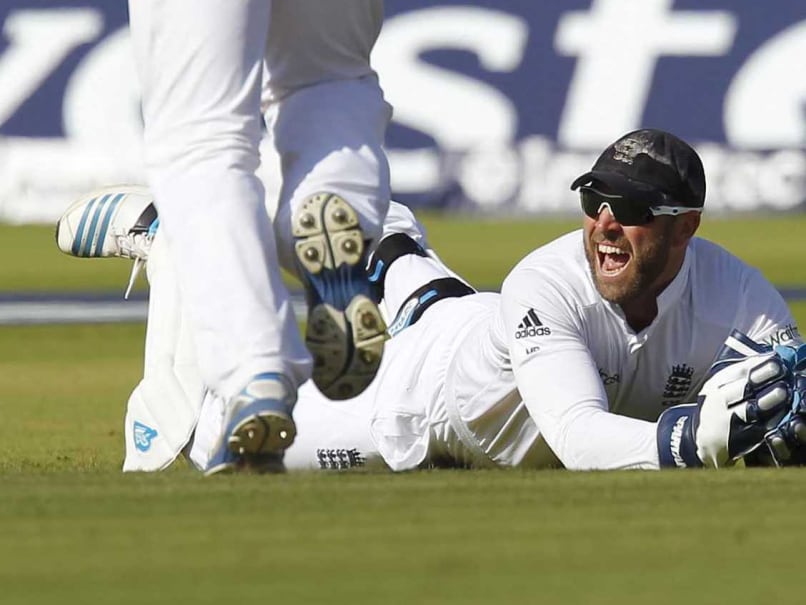 India captain Mahendra Singh Dhoni hailed his side's determination in forcing the collapse of England who faced new trouble Tuesday when wicketkeeper Matt Prior withdrew for at least the rest of the season. (Match Report)

India head towards the third Test in Southampton on Sunday in a dominant position against a demoralised England -- crushed by 95 runs at Lord's on Monday.

Ishant Sharma, not the fastest bowler in world cricket and not renowned for his use of the short ball, bounced out a succession of England batsmen after Dhoni, playing his last Test at Lord's, finally persuaded him to drop short. ('Indians Can Bounce Teams Out Too')

The result was a devastating burst of five wickets for 24 runs in 33 balls either side of lunch that led Sharma to finish with Test-best figures of seven for 74. Â(Cook Struggles to Accept 'Tough Lord's Defeat')

India ended a woeful sequence of 15 successive Tests without an away victory. England have now not won in 10 Tests.Â (England Bullied, Bounced Out by India, Says Warne)

Now India will hope for a 'win' off the field when Ravindra Jadeja takes part Tuesday in a preliminary hearing on International Cricket Council disciplinary charges arising from his alleged confrontation with England's James Anderson during the first Test in Nottingham.

The pair shook hands at Lord's after Jadeja ran out Anderson to seal only India's second Test win at the 'home of cricket' in 82 years of trying following ar five-wicket victory back in 1986.

"This is a result of hard effort... and it was fantastic to see the determination the guys showed," said Dhoni.

"It seems it will be my last at Lord's, for sure... so it's definitely memorable," the 33-year-old wicketkeeper-batsman added.

"To start with it was very difficult to convince him.

"I set the field for him so that he doesn't even think of bowling up --he is forced to bowl the length that I want him to bowl."

The plan worked better than even Dhoni could have hoped for.

Moeen Ali was caught at short leg off a bouncer to the last ball before lunch. After the break Matt Prior , Ben Stokes -- who completed a pair -- and Joe Root all fell trying to hook Sharma.

"He (Sharma) has the height so he can exploit the bounce and put pressure on batsmen and can add this to his armoury," Dhoni said.

"We have been trying to convince our bowlers to bowl a few bouncers."

England captain Alistair Cook said he would not be quitting, despite the result. Wicketkeeper Prior told his teammates in the dressing room however that he would not be playing any more tests this summer -- which could effectively mean the end of his international career.

Prior, 32, said he needs time off to treat injuries, including an Achilles problem that will need surgery, which has hit his form.

"I'm not doing justice to myself and more importantly the team and that is what matters first and foremost," Prior said. Â(Dhoni Hails Ishant's Heroic Spell)

"I've always said as long as I can do my job I will manage the pain and get on with it, but it has now got to the point where I can't do my job to the level I expect of myself."

"It is a huge decision and not one I've taken lightly obviously because I could have played my last game," Prior said.

For Cook, the pain of a 10th straight Test without a win was compounded by two more low scores that meant the opener had now gone 27 innings without a Test hundred.

The latest defeat led to a chorus of ex-England skippers to call for Cook's resignation as captain.

But even after the 5-0 Ashes thrashing in Australia and the latest defeat, Cook insisted he had no intention of quitting.

He knows the pressure is on after even his usually supportive predecessor Andrew Strauss labelled a "shambolic" England performance.

"I haven't had any tougher times in my career than at the moment," said Cook. "It gets harder and harder the longer it goes on.

"But I don't think walking away from it would be the way to go," he said.

Comments
Topics mentioned in this article
Matt Prior England Cricket Team England vs India 2011 Lord's, London Cricket Eng vs Ind, 2014
Get the latest updates on Fifa Worldcup 2022 and check out  Fifa World Cup Schedule, Stats and Live Cricket Score. Like us on Facebook or follow us on Twitter for more sports updates. You can also download the NDTV Cricket app for Android or iOS.