Riding on opener Murali Vijay's unbeaten 122, India took the honours on day one of the first Test against England by reaching 259/4 at stumps on Wednesday. 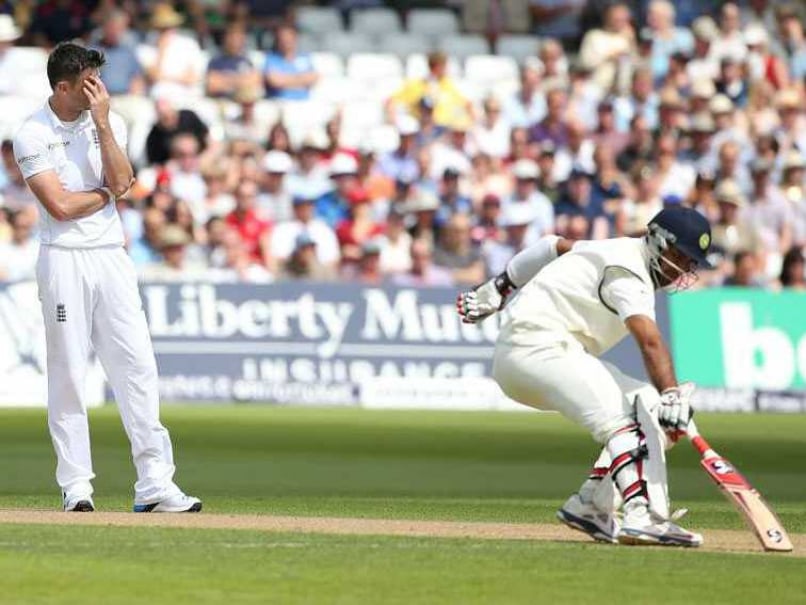 England fast bowler James Anderson on Wednesday expressed unhappiness at the placid nature of the pitch on offer at the Trent Bridge for the first cricket Test against India, saying that the wicket assisted the visitors more than the home side on the first day.

Riding on opener Murali Vijay's unbeaten 122, India took the day one honours by reaching 259/4 at stumps on Wednesday. (Highlights)

"It is a little frustrating because you want it to be an even contest between the bat and ball, and it does not seem to be at the moment," he said. (Also read: Trent Bridge groundsman apologises for 'Indian' pitch)

"But we have been aware as a bowling unit that the Test pitches will be more batsmen friendly. So I think our bowling was fantastic today. We could have moaned about it and worried about it, but we just gave our best," he added. (Also read: Dream come true for me, says Vijay)

It was a frustrating day for the hosts as much talk centred on the placid pitch laid out for this Test match. It is the third such pitch in succession for a Test this summer and considering that England lost to Sri Lanka prior to this series, it will not have pleased the home side.

Anderson, who took two Indian wickets for 70 runs, said that his side will be looking to restrict India's first innings score to 400.

"It is a good batting pitch, but we will be looking to restrict them to something around 400," he said.

"Ideally we would like to bowl them out for much lower than that but given the pitch I think we will take 400. But we need to rest up today and then come back tomorrow and get the remaining six wickets as early as possible," he added.

India sped off to a great start but were then pegged back by quick wickets after lunch. But Vijay held the innings together, putting together a 71-run partnership with Ajinkya Rahane and then an 81-run unbeaten partnership with skipper Mahendra Singh Dhoni to anchor his team to safety.

The wickets had come in between largely thanks to some fancy fielding positions and Anderson praised his captain Alaistar Cook for that.

"On a pitch like that you want to try and be creative, and unsettle the batsmen. All the bowlers came up with ideas and Cook was brilliant with his field placing and inputs. The way we came back after lunch and bowled, I think we did very well to get those quick wickets and we could have had another one but it just short of the slips," Andreson said.

"We have been working on reverse swing as well and when we saw the pitch we knew we would have to work on the ball quickly, and keep at it. And try different things with the ball, different fields, different styles of bowling, and I think we tried pretty much everything. We knew we were in for a tough day and we stood up," he added.

Given the placid nature of the pitch, there's a fear that it might flatten out even more and hurt England's chances both in terms of bowling and batting. Moeen Ali bowled just 10 overs on day one and the English are really missing a full-time spinner. Also, the threat of Indian spin also looms large on the home batsmen.

"I am not sure it will turn much on the first three days, it will stay the same. But on the last couple days, it should take some turn as any normal Test wicket," Anderson said.

Comments
Topics mentioned in this article
Eng vs Ind, 2014 James Anderson India Cricket Team England Cricket Team Cricket
Get the latest updates on ICC Women's Cricket World Cup 2022 and IPL 2022, check out the Schedule , Live Score and IPL Points Table. Like us on Facebook or follow us on Twitter for more sports updates. You can also download the NDTV Cricket app for Android or iOS.