Extending his fourth Test century, Vijay finished a good opening day for India at the crease with captain Mahendra Singh Dhoni, who was 50 not out on Day 1 of the first Test in Trent Bridge. 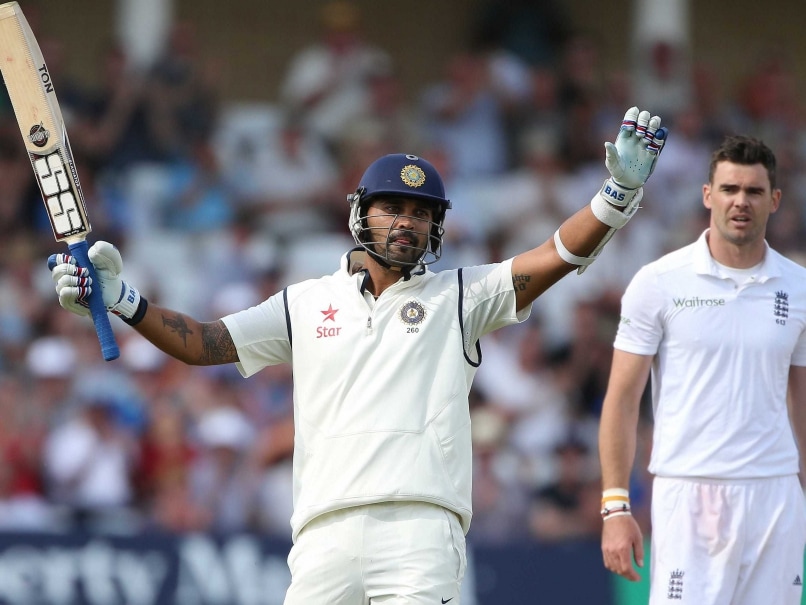 Murali Vijay's maiden overseas Test hundred took India to 259 for four at stumps on a grinding first day of a five-match series with England at Trent Bridge on Wednesday.

Vijay was 122 not out after batting through the whole day, with India captain Mahendra Singh Dhoni unbeaten on 50 exactly. (Day 1 Highlights)

Together the pair had put on an unbroken 81 for the fifth wicket.

India, after Dhoni won the toss on a sunny day, overcame the early loss of Shikhar Dhawan to be 106 for one at lunch on a placid pitch.

But England then took two wickets for one run to reduce India to 107 for three and the run-rate slowed significantly with Stuart Broad (one for 26 in 19 overs) particularly miserly on his Nottinghamshire home ground.

Vijay was into his stride right from the first over, which saw him strike England spearhead James Anderson for three fours in as many balls.

But Anderson, who has taken more Test wickets at Trent Bridge than any other bowler, did claim his 50th scalp on the ground when he found Dhawan's outside edge and wicketkeeper Matt Prior, passed fit after a minor thigh injury, took an excellent diving left-handed catch in front of England captain Alastair Cook at first slip.

Such was Vijay's touch, his first fifty featured 44 runs in boundaries.

Cheteshwar Pujara fell for his lunch score of 38 to a well-set trap when he chipped an Anderson delivery that 'stopped' to the rarely deployed position of silly mid-on, where Ian Bell took a superb one-handed catch diving full-stretch to his right.

Pujara's dismissal was also a tactical triumph for Cook, much criticised for his tactics during England's recent run of eight Tests without a win.

Rising star Virat Kohli, on one, then carelessly opened the face against Broad and guided the ball low to Bell, now at second slip.

England, gaining a measure of reverse swing, restricted India to a mere 18 runs in the first 14 overs after lunch.

But with Cook unwilling to deploy part-time off-spinner Moeen Ali, Vijay made the most of any opportunities he was given by England's seam quartet and late cut recalled all-rounder Ben Stokes for two fours.

But Rahane, as happened to Pujara, failed to add to his interval score when he was dismissed in the first over after tea thanks to another smart ploy from Cook.

Rahane, unsettled by an earlier short ball, tried to pull Liam Plunkett but only made contact with the toe of the bat, the ball deflecting to Cook, who grabbed the catch at silly point - not an obvious position for a fast bowler such as Plunkett.

Vijay spent 13 balls on 99 before a scampered single off Anderson saw the 30-year-old to his fourth hundred in 23 Tests and first outside India in more than four-and-a-half hours at the crease.

Vijay, however, raised a stand of fifty by advancing down the pitch to drive Ali for six over long-off, while Dhoni upped the tempo with a 64-ball fifty of his own.

Vijay had made 110 when Plunkett appealed for lbw.

But England, with the Decision Review System not in use this series because of Indian objections, had to accept Australian umpire Bruce Oxenford's not out decision, which replays suggested would still have stood even under DRS.

Comments
Topics mentioned in this article
India Cricket Team England Cricket Team England vs India 2011 Stuart Binny MS Dhoni Cricket Trent Bridge, Nottingham England vs India, 2014-07-09 Eng vs Ind, 2014
Get the latest updates on Fifa Worldcup 2022 and check out  Fifa World Cup Schedule, Stats and Live Cricket Score. Like us on Facebook or follow us on Twitter for more sports updates. You can also download the NDTV Cricket app for Android or iOS.