After Shafiul Islam's strikes put Zimbabwe on the back foot early in their chase of 270, Ziaur's five for 30 snuffed out any hope of a revival as the hosts were bowled out for 148. 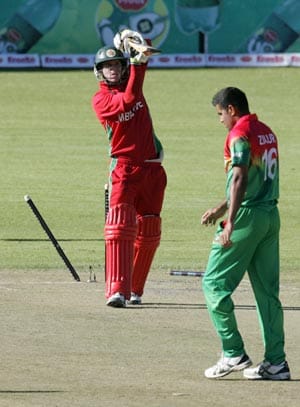 Ziaur Rahman's maiden five-wicket haul in just his fourth one-day international saw Bangladesh record a comprehensive 121-run victory over Zimbabwe in the first of a three-match series in Bulawayo.

After Shafiul Islam's strikes put Zimbabwe on the back foot early in their chase of 270, Ziaur's five for 30 snuffed out any hope of a revival as the hosts were bowled out for 148.

Although Bangladesh have a healthy record at Queens Sports Club, winning six out of eight one-dayers before this encounter, the margin by which Zimbabwe lost led captain Brendan Taylor to brand the defeat a "shocker".

"We were happy restricting them to 269 (for eight) on a flat wicket, but we didn't bat well," he said. "There's no room for excuses. We kept finding ways to get out."

Despite losing Regis Chakabva and Pakistan-born debutant Sikandar Raza in the opening four overs of their reply, Zimbabwe recovered through Taylor's 33 and Hamilton Masakadza's 38.

However, when Taylor was bowled by Abdur Razzak the floodgates soon opened, as Zimbabwe lost four wickets without adding a run to slump to 93 for seven.

Three of those dismissals were to Ziaur, who returned later to find reverse swing and grab the wickets of Malcolm Waller and Tinashe Panyangara.

When Shingirai Masakadza's spirited knock of 33 from as many deliveries was ended by Robiul Islam, Bangladesh had a handsome victory.

"We are always happy with such wins," said captain Mushfiqur Rahim. "It was an important match because it was the series opener."

Bangladesh were also indebted to Nasir Hossain, who continued his good form with the bat in rescuing Bangladesh from a mid-innings collapse.

The tourists made a steady start after being put in to bat - with Tamim Iqbal and Mohammad Ashraful putting on 65 for the first wicket - only for Shingirai Masakadza to remove the pair in his opening two overs and then Mushfiqur Rahim in his fifth.

With Shakib Al Hasan also run out for a single, Bangladesh had slumped to 94 for four, but Nasir came in with confidence high after his 77 and 67 not out in Bangladesh's second-Test victory.

He duly added 76 with Mominul Haque, then 44 in seven overs with Mahmudullah, before holing out to deep point for a run-a-ball 68.

Shingirai Masakadza's 4 for 51 was somewhat negated by the 18 wides Zimbabwe bowled, but ultimately it was the home side's batting and Ziaur's bowling that ensured a one-sided result.

Comments
Topics mentioned in this article
Cricket Bangladesh Cricket Team Shafiul Islam Ziaur Rahman Zimbabwe Cricket Team West Indies Cricket Team
Get the latest updates on IPL Auction 2023 and check out  IPL 2023 and Live Cricket Score. Like us on Facebook or follow us on Twitter for more sports updates. You can also download the NDTV Cricket app for Android or iOS.