Yuzvendra Chahal and fellow wrist-spinner Kuldeep Yadav were rested for the three-match T20I series against the West Indies. But both will return to action in the ODIs. 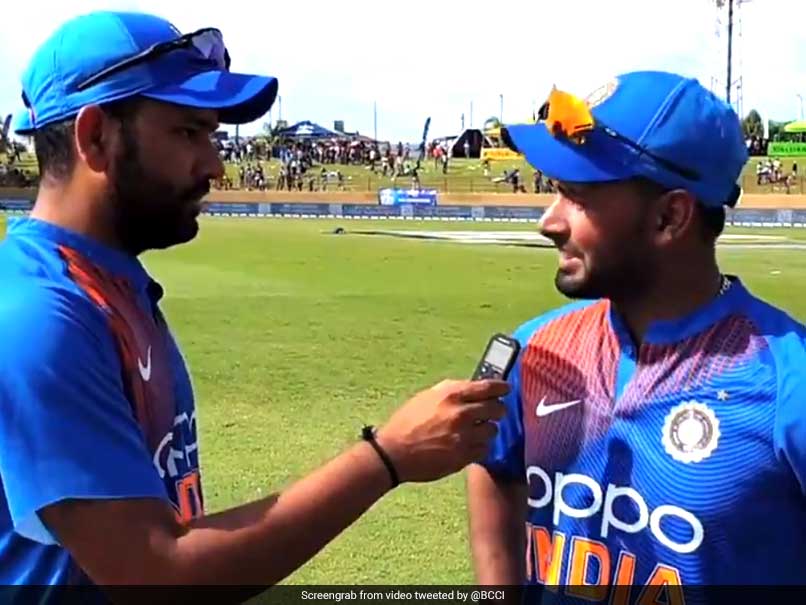 India registered a seven-wicket victory over the West Indies in the final T20I of the three-match series in Guyana on Tuesday. India wicketkeeper-batsman Rishabh Pant played a match-winning knock of 65 runs off just 42 balls with the help of 4 fours and 4 sixes. After the match, Rohit Sharma, who was rested in the 3rd T20I, interviewed Pant on BCCI.tv. India leg-spinner Yuzvendra Chahal, who is also known for his popular "Chahal TV" where he interviews teammates, made a cheeky remark on the interview.

The official Twitter handle of Board of Control for Cricket in India (BCCI) shared the interview with a caption, which read "Guyana diaries: "@ImRo45 & @RishabhPant17 unplugged. Two low scores & a match-winning fifty. The Hitman finds out how Pant turned it around in the final T20."

Two low scores & a match-winning fifty. The Hitman finds out how Pant turned it around in the final T20I - by @28anand #TeamIndia #WIvIND

"Chahal TV" was a miss in the T20I series as Chahal along with Kuldeep Yadav was rested for the three-match T20I series against the West Indies.

The leg-spinner will make a return in the three-match ODI series, beginning Thursday. The match will be played at Providence Stadium in Guyana, the same venue which hosted the third T20I between India and the West Indies. India clinched the three-match T20I series 3-0.

Speaking to India vice-captain Rohit Sharma for BCCI.tv, Pant had said that whenever he failed to perform for his team and his plans did not work, he did get frustrated.

"Felt really good about my innings. I was not able to score runs and was getting frustrated. But I kept following my process and it fetched the desired results today," he had said.

Yuzvendra Chahal Cricket West Indies vs India 2019
Get the latest updates on ICC T20 Worldcup 2022, check out the Schedule and Live Score. Like us on Facebook or follow us on Twitter for more sports updates. You can also download the NDTV Cricket app for Android or iOS.