Yuvraj Singh heaped praise on a group of policemen for "sharing their own food" with a man in need amid lockdown. 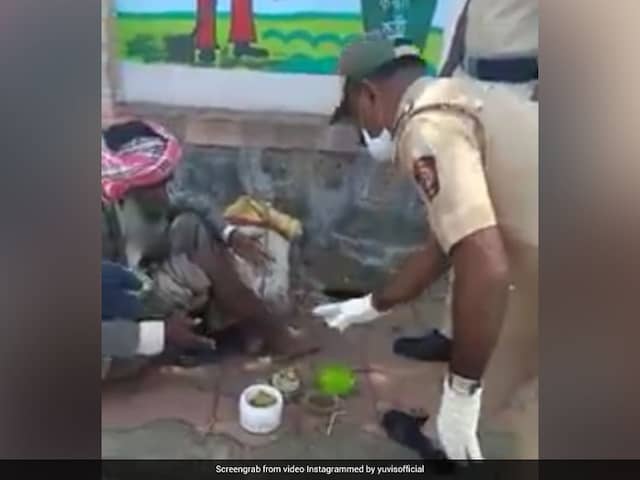 In the viral video, policemen can be seen feeding a hungry man with their own food.© Instagram

Yuvraj Singh shared a viral video on Instagram, heaping praise on a group of policemen for "sharing their own food" with a man in need. "It's heartwarming to see such an act of humanity shown by these policemen. Much respect for their act of kindness during these tough times and for sharing their own food," former India all-rounder Yuvraj Singh captioned the video, along with trending hashtags: "#StayHomeStaySafe" and "#BeKind". In the three-minute-30-second long video, a group of policemen can be seen feeding a man, who was walking on the road, their own food.

It's heartwarming to see such act of humanity shown by these police men. Much respect for their act of kindness during these tough times and for sharing their own food.

India is in lockdown until April 14 and many cricketers have come forward to help the nation in its fight against deadly coronavirus pandemic.

Yuvraj was among 40 elite sportspersons in the country who attended a meeting with Prime Minister Narendra Modi via video conference on Friday.

The PM interacted with the sports personalities for the first time since the 21-day lockdown was enforced on March 24 to contain the spread of the coronavirus.

The two countries are bitter rivals and the move touched a raw nerve in India. Afridi's appeal for donations to help people affected by the deadly virus in Pakistan has had overwhelming support from Indian cricketers such as Yuvraj and his former teammate Harbhajan Singh.

Soon after receiving backlash on social media, Yuvraj cleared his views, saying: "I really don't understand how a msg to help the most vulnerable people gets blown out of proportion! All I tried to achieve through that message was to help people in our own respective countries by providing healthcare, my intention was not to hurt anyone's feelings. I'm an Indian and I will always bleed blue and will always stand for humanity. Jai Hind."