Bengal now have five points from three matches to lie low at sixth place, while MP have seven at the fourth position in group B standings. 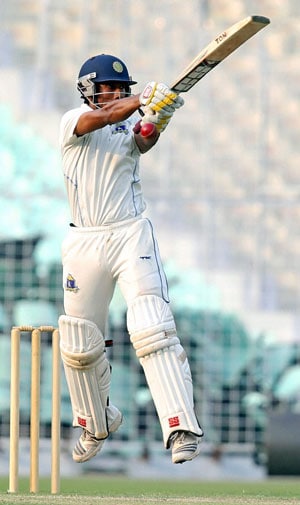 Steered by Wriddhiman Saha's stroke-filled half-century, Bengal on Sunday put up an improved batting show to salvage a draw and settle for one point against Madhya Pradesh who logged three in their Ranji Trophy group B league here.

Resuming their second innings at 43 for no loss with a deficit of 125 runs, Bengal lost two quick wickets to be on 86/2 midway into the first session after offspinner Jalaj Saxena (4/117) dismissed both the openers -- Rohan Banerjee (43) and first innings centurion Arindam Das (39).

But Saha (69) once again proved his worth to be the mainstay of their batting as the wicketkeeper batsman stitched two important partnerships -- 78 runs with Anustup Majumdar (38) and 73 with Subhomoy Das (59).

The first partnership that came before the lunch helped Bengal avoid the deficit while in Subhomoy, Saha found a perfect ally as the duo shattered MP's hope for six points with an outright victory.

Saha's knock from 95 balls with nine fours and one six was more of elegance while Subhomoy showed fine temperament as the duo took the total past 200.

Eyeing a second consecutive Ranji victory against Bengal, MP had disappointment in store as their strike bowler Ishwar Pandey returned wicketless, failing to utilise the early morning condition which was ideal for swing bowling.

But it was a memorable outing for Saxena who had a career-best match haul of 10 wickets (10/170). The offspinner had best figures of 6/53 in the first innings.

Bengal now have five points from three matches to lie low at sixth place, while MP have seven at the fourth position in group B standings.

Madhya Pradesh boast of a fine record against Bengal, having defeated them comprehensively in Indore last season for six points, while in 2011-12 they walked away with three points chasing down 496 in the first innings at JU Saltlake campus.