AB de Villiers was in sensational form when he smashed 162 not out against West Indies in the World Cup. 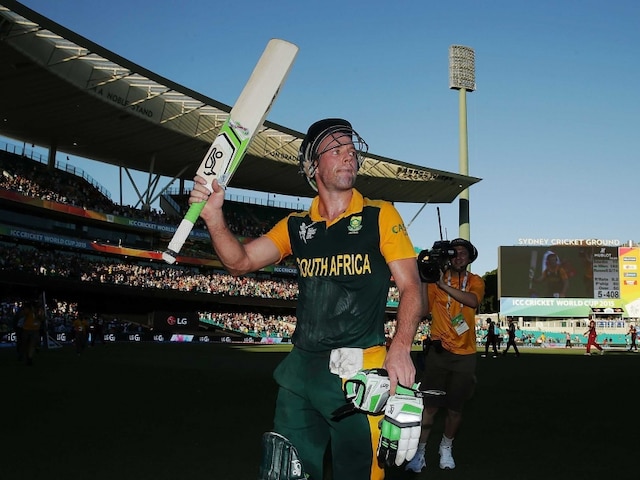 Former South Africa cricket captain Shaun Pollock on Monday said current skipper A.B. de Villiers could produce "something really special" in their World Cup Pool B match against Ireland at the Manuka Oval on Tuesday, having seen both of the South African captain's destructive innings in the last month.

"After he walked off the Sydney Cricket Ground he did an interview and he said, 'I just got lucky', it's much more than that," Pollock was quoted as saying by the Sydney Morning Herald.

"I've seen him do it twice ... he can be very destructive if he gets himself in and he's just a quality player. There's a good chance you might see more of the same tomorrow," he said.

But the 41-year-old warned Ireland can be quite a force to reckon with as it has been in quite good form recently beating the two-time World Cup champions the West Indies.

"You might see more of the same from one of the South African batsmen - or even the Irish, they've sprung a surprise already in this tournament beating the West Indies."

On comparing De Villiers to Ireland batsman Kevin O'Brien he said: "They play different roles, but Kevin's got that ability, he got that quick 50 and that was really good."

"He's (Kevin) an exciting player and if he gets going he might put on a display as well. There's a lot of nice things to come and watch," the former all-rounder concluded.

Comments
Topics mentioned in this article
South Africa Cricket Team Ireland Cricket Team Shaun Pollock AB de Villiers Cricket
Get the latest updates on IPL 2020, check out the IPL Schedule for 2020 and Indian Premier League (IPL) Cricket live score . Like us on Facebook or follow us on Twitter for more sports updates. You can also download the NDTV Cricket app for Android or iOS.