The Windies ran riot in the opening match of a triangular series also featuring Bangladesh. 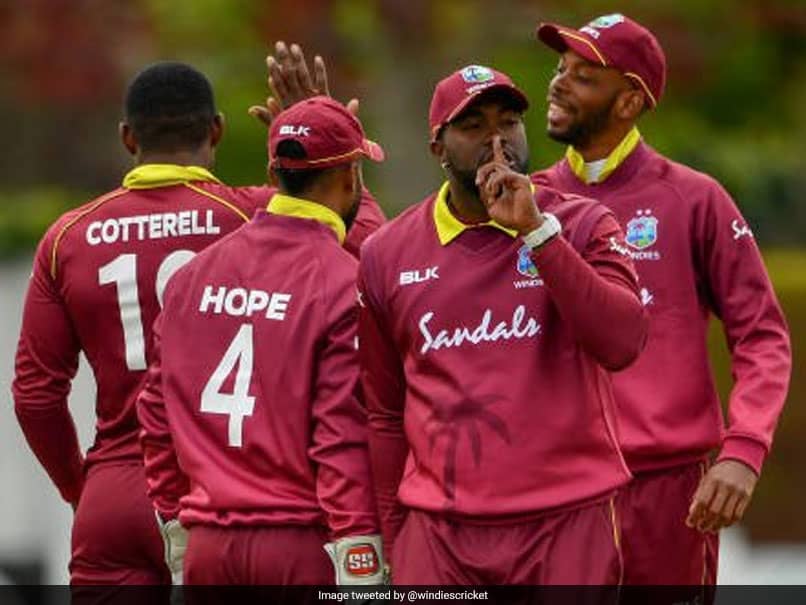 The Windies thrashed Ireland by 196 runs in Dublin on Sunday.© Twitter

Windies openers John Campbell and Shai Hope shattered the record for the highest first-wicket partnership in a one-day international with a stand of 365 as their side thrashed Ireland by 196 runs in Dublin on Sunday. Campbell made 179 and Hope 170 in an eventual total of 381 for three after the visitors were sent in to bat by Ireland captain William Porterfield at Clontarf. The Caribbean duo were only seven runs shy of the record partnership for any wicket in a men's ODI, with their fellow Windies Chris Gayle and Marlon Samuels smashing 372 for the second wicket against Zimbabwe in Canberra during the 2015 World Cup.

Campbell and Hope did, however, comfortably exceeded the previous opening best at this level of 304 set by Pakistan's Imam-ul-Haq and Fakhar Zaman against Zimbabwe in Bulawayo in July last year.

Hope was first to his century while Campbell quickly followed to him to a hundred -- his first in international cricket.

McCarthy's figures of two for 76 in a maximum 10 overs were almost respectable amid the torrent of runs.

Faced with a mammoth chase, Ireland promptly collapsed to 21 for three before Kevin O'Brien's 68 at least gave the West Indies bowlers something to think about.

But the Windies were always in control with off-spinner Ashley Nurse taking four for 51 in Ireland's 185 all out.

Ireland Cricket Team Cricket
Get the latest updates on India vs Australia Series, check out the India vs Australia Schedule for 2020-21 and Ind vs Aus live score . Like us on Facebook or follow us on Twitter for more sports updates. You can also download the NDTV Cricket app for Android or iOS.