Fabian Allen clobbered three sixes off the penultimate over to lead West Indies to a nervy three-wicket win against Sri Lanka in the third and final T20I. 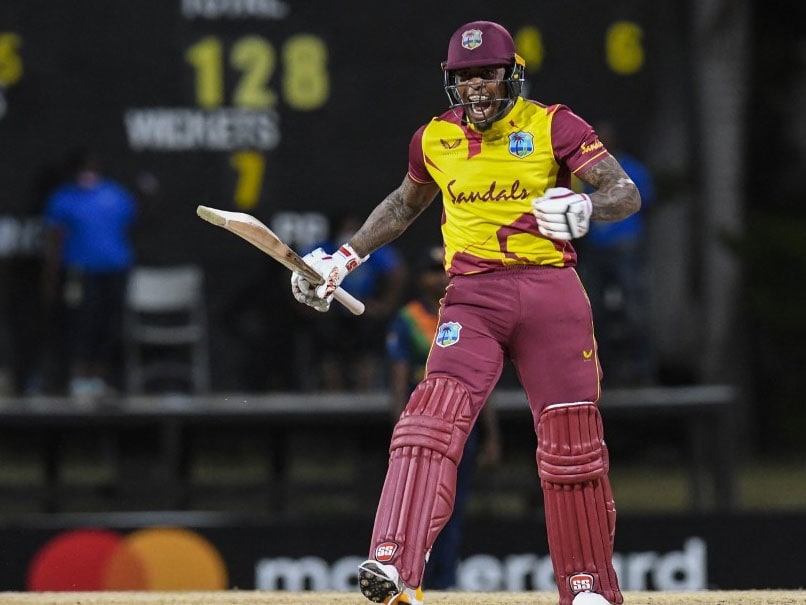 All-rounder Fabian Allen clobbered three sixes off the penultimate over to lead West Indies to a nervy three-wicket win against Sri Lanka in the final Twenty20 International on Sunday. Chasing a modest target of just 132, the two-time world champions struggled in the run chase as their star trio of Chris Gayle, skipper Kieron Pollard and Dwayne Bravo all flopped. Allen's three sixes came off spinner Akila Dananjaya as the 25-year-old Jamaican smashed a desperately needed 21 off just six balls faced at Coolidge Cricket Ground.

West Indies finished on 134-7, clinching the three-game series 2-1 after a four-wicket win in the first match followed by Sri Lanka's 43-run victory in the second.

Dananjaya was again the victim of some explosive West Indies batting after Pollard hit six sixes off one of his overs in the first game on Wednesday.

"I prepare for everything, including bowling in the powerplay," said Allen, who earlier took 1-13 opening the bowling.

"When I look in the dressing room we have a lot of batting power.

"I told (batting partner) Jason Holder that I'm not comfortable batting against (Wanindu) Hasaranga, so I told him to bat him out and I'll be finishing. I just backed myself in the end. It was a good performance overall."

The home side were cruising after limiting Sri Lanka to 131-4.

Openers Evin Lewis (21) and Lendl Simmons (26) gave them a solid start before Sri Lanka leg spinner Hasaranga (2-13) dismissed them both for a series haul of eight wickets.

Wrist spinner Lakshan Sandakan clean-bowled Gayle for 13, completing a poor international return for the 41-year-old who made just nought and 16 in the first two games.

Gayle has now gone five years without a fifty in T20 internationals.

Pollard, who became only the third man to hit six sixes in an international over on Wednesday, was bowled by seamer Dushmantha Chameera for nought.

Bravo too went for a duck, a second wicket in two balls for Sandakan having also sent back Rovman Powell.

But with 20 runs required off the last 12 balls, Allen smashed Dananjaya for 20 runs off the penultimate over for the victory.

It was a topsy-turvy series for Dananjaya,  who was the fall-guy for Pollard's pyrotechnics last Wednesday having taken a hat-trick in the same game.

Chandimal carved out an undefeated 54 with three boundaries to finish four runs short of his best of 58 in the format made against Australia at Pallekele in 2016.

The 31-year-old, playing in his 57th T20 International, had contributed just 11 and three in the first two games.

Bandara, 22 and on his debut tour, hit an unbeaten 44 with three fours and his team's only two sixes.

Sri Lanka were in desperate trouble early in their innings, reaching 10 overs with just 47 on the board for the loss of four wickets having won the toss and deciding to bat first.

On their way to winning the second game on Friday at the same venue by 43 runs, they had amassed 94-0 at the halfway point.

On Sunday, they managed just two boundaries in the first 10 overs with opener Danusha Gunathilaka, who top-scored Friday with 56, out this time for just nine, caught and bowled by Allen.

The two sides will now play three ODIs and two Tests, all in Antigua.

Chris Gayle Akila Dananjaya West Indies vs Sri Lanka, 3rd T20I Cricket
Get the latest updates on IPL Auction 2023 and check out  IPL 2023 and Live Cricket Score. Like us on Facebook or follow us on Twitter for more sports updates. You can also download the NDTV Cricket app for Android or iOS.