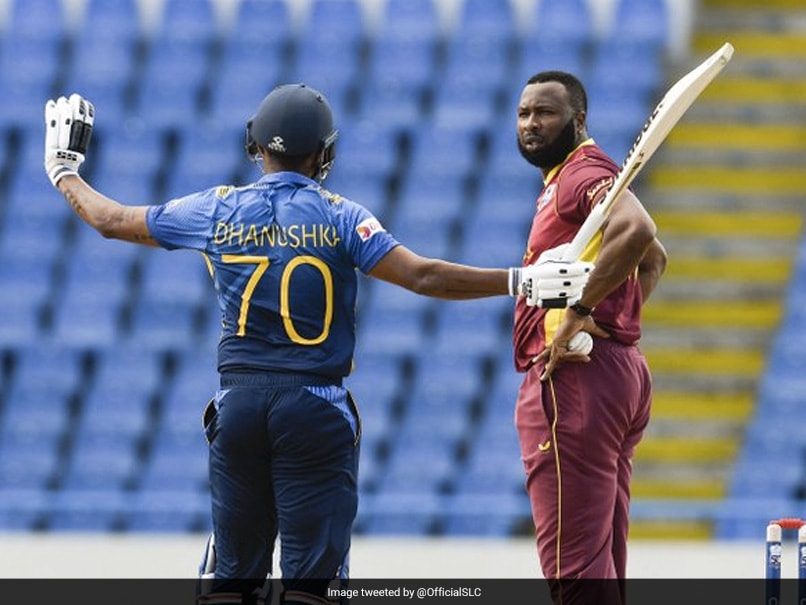 Danushka Gunathilaka was given out obstructing the field in the first ODI on Wednesday.© Twitter

West Indies defeated Sri Lanka in the first One-day International (ODI) on Wednesday to take 1-0 lead in the three-match series. While it was a clinical performance from the West Indies, there was an incident that took away all the spotlight -- the run out of Sri Lanka opening batsman Danushka Gunathilaka. In the 21st over, Gunathilaka, batting on 55, defended a ball from Kieron Pollard and took off for a single but changed his mind midway and as he was trying to get back in his crease, the Sri Lankan batsman pushed the ball away from the West Indies skipper. Pollard was left frustrated and he appealed against Gunathilaka for obstructing the field.

The on-field umpire went upstairs to check with TV umpire and after looking at few replays, he gave the decision in favour of the fielding side.

Watch the video of the contentious run out here:

That should have been not-out! Gunathilaka didn't do that intentionally.#WIvSL pic.twitter.com/914OAWV0zk

"How this is out?", Harbhajan tagged ICC while asking the about the run-out decision.

"Jeez .. just saw this .... NOT OUT 8 days of the week . He only looks down when he feels something hit his boot in my opinion #WIvSL," former Sri Lanka cricketer Russel Arnold tweeted.

Jeez .. just saw this .... NOT OUT 8 days of the week . He only looks down when he feels something hit his boot in my opinion #WIvSL .. https://t.co/wakJKeos3I

Tom Moody termed the decision as a shocker while Michael Vaughan reacted by saying that cricket has officially gone bonkers.

“Wilful obstruction” no way was that wilful... #shocker #WIvSL

In the match, the hosts managed to bowl out Sri Lanka for 232 in 49 overs as Jason Mohammed and Jason Holder picked up two wickets apiece.

In reply, Shai Hope slammed his 10th ODI centuryas the West Indies successfully chased down the 233-run target with eight wickets in hand.

Harbhajan Singh Russel Arnold Tom Moody Michael Vaughan
Get the latest updates on T20 World Cup, check out the T20 World Cup Schedule and Live Score . Like us on Facebook or follow us on Twitter for more sports updates. You can also download the NDTV Cricket app for Android or iOS.