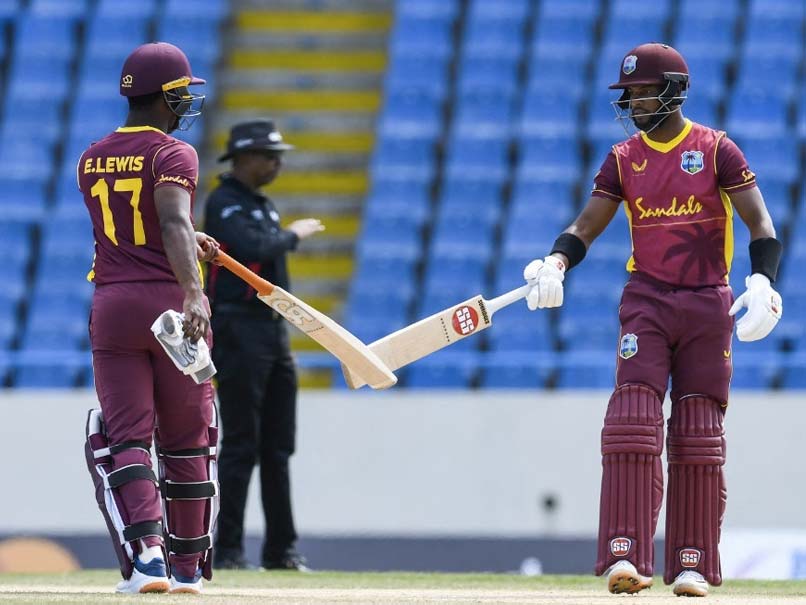 Shai Hope and Evin Lewis put on a 143-run opening stand to setup the chase for the hosts.© AFP

Shai Hope marked his return to West Indies duty with an assured hundred in guiding his team to a comfortable eight-wicket victory over Sri Lanka in the first One-Day International of a three-match series at the Sir Vivian Richards Stadium in Antigua on Wednesday. On a day when Sri Lankan opening batsman Danushka Gunathilakabecame just the eighth player in more than 50 years of ODI cricket to be dismissed obstructing the field, Hope returned to his best form with an innings of 110.

It was his tenth century in this format of the game, to ensure that the tourists' total of 232 all out was overhauled comfortably.

Dropped from the West Indies team following a wretched tour of England last July, Hope's only real discomfort across 133 deliveries in which he stroked 12 fours and one six was the pace of Dushmantha Chameera, who struck the elegant batsman on the helmet when 20 runs short of three figures.

"I just had patience and trusted my ability," said Hope after receiving the Man of the Match award.

"I made sure I negated the threat they threw at us. (Wanindu) Hasaranga was the main threat and I thought we played him well."

Chameera was Sri Lanka's lone wicket-taker, eventually breaching the defence of Hope after earlier ending an opening stand of 143 when he yorked Evin Lewis, whose innings of 65 occupied 90 deliveries and was decorated with four fours and two sixes.

Hasaranga bowled a miserly ten-over spell but could not get the wickets needed to keep his team in the hunt.

Seeking to regain his ground at the non-striker's end in turning down an opportunity for a single in the 22nd over off the bowling of home captain Kieron Pollard, Gunathilaka, who was moving backwards, kicked the ball out of the path of Pollard who was attempting to effect a run out.

With the West Indies appealing for the dismissal, on-field umpires Joel Wilson and Gregory Brathwaite turned to television official Nigel Duguid for clarification and the interpretation came back that it was determined to be a deliberate effort by the left-handed opener to impede the bowler.

Clearly not pleased with the verdict, Sri Lanka's South African coach Mickey Arthur appeared to be seeking clarification on the ruling from Match Referee Richie Richardson shortly after.

Gunathilaka's dismissal for a top score of 55 came two overs after Pollard had effected the breakthrough to end an opening stand of 105 with Dimuth Karunaratne, the Sri Lankan skipper justifying the decision to bat first on winning the toss with a fluent innings of 52.

Fresh from leading the home side to a 2-1 triumph in the preceding T20 International series, Pollard brought himself into the bowling attack in the 20th over and enjoyed immediate success, displaying remarkable athleticism after parrying a caught-and-bowled effort to dive full-length to his right and come up with a stunning catch.

Sri Lanka's innings stuttered thereafter and it was only an even 50 from Ashen Bandara, one of two debutants in the tourists' line-up, which lifted them to a respectable total.

Kieron Pollard Danushka Gunathilaka Cricket
Get the latest updates on IPL Auction 2023 and check out  IPL 2023 and Live Cricket Score. Like us on Facebook or follow us on Twitter for more sports updates. You can also download the NDTV Cricket app for Android or iOS.