Shane Dowrich led yet another West Indies rearguard with an unbeaten half-century as the West Indies rallied from 53 for five to reach stumps at 132 without further loss on a rain-hit opening day of the third and final Test match. 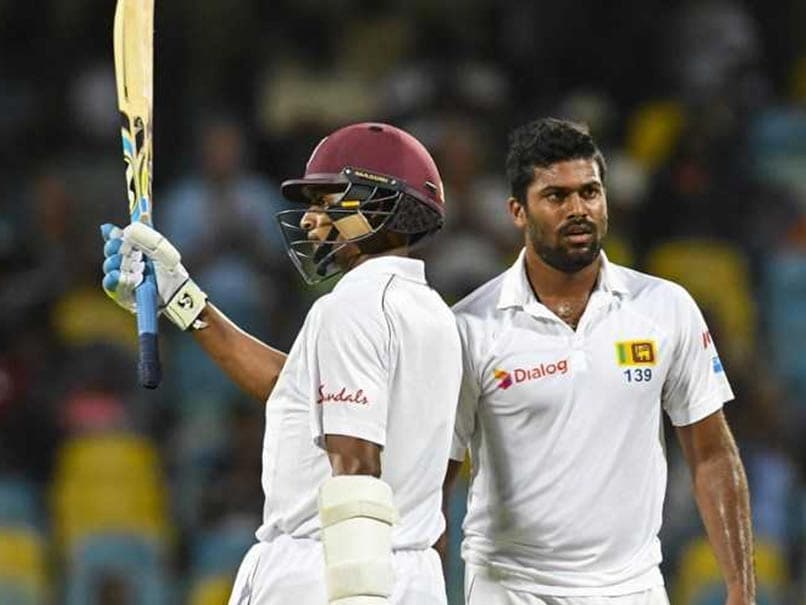 Shane Dowrich led yet another West Indies rearguard with an unbeaten half-century.© AFP

Shane Dowrich led yet another West Indies rearguard with an unbeaten half-century as the West Indies rallied from 53 for five to reach stumps at 132 without further loss on a rain-hit opening day of the third and final Test match. Almost half of the scheduled overs were lost to intermittent showers as day/night Test cricket came to the Caribbean for the first time, three years after the first such fixture was played between Australiaand neighbours New Zealand in Adelaide. Having already played a vital role in the series with an unbeaten 125 that rescued the West Indies in the first innings of the series in Trinidad two weeks earlier, the wicketkeeper-batsman's rich vein of form continued on his home ground Saturday at the Kensington Oval.

His assured innings of 60 not out was well supported by Jason Holder, the West Indies captain contributing 33 not out in an unbroken sixth-wicket stand of 79 and going some way towards justifying his decision to bat first on a green pitch, notwithstanding the struggles faced by the home side's top order against a Sri Lankan attack spearheaded by stand-in skipper Suranga Lakmal.

Appointed to lead the tourists with regular captain Dinesh Chandimal suspended for the match after being found guilty of ball tampering during the second Test in St Lucia, Lakmal swiftly dispensed with openers Devon Smith and Kraigg Brathwaite on a grassy pitch.

Lahiru Kumara, Sri Lanka's top bowler of the series, then removed Kieran Powell cheaply as well to have the home side reeling at eight for three. A one-hour break for rain offered some respite to the home batsmen but when play resumed Kasun Rajitha followed up on an encouraging debut in the second Test by dismissing Roston Chase immediately upon coming into the attack.

When Rajitha accounted for Hope at the start of the second session, West Indian prospects of a decent first innings total looked grim, especially with the trend over the previous nine day/night Test matches in other parts of the world for bowlers to hold sway with the pink ball during the twilight period.

But Dowrich and Hope batted with relative ease and will be looking to extend what has already been a productive partnership deep into the second day.

Lakmal, the first seamer ever to lead Sri Lanka in a Test, wasted no time in making the most of the sporting track earlier in the afternoon when play got underway in bright sunshine.

Smith stabbed at the last delivery of the first over of the match and Dhananjaya de Silva showed a safe pair of hands to come up with the catch at third slip. Danushka Gunathilaka, brought in effectively as Chandimal's replacement in the middle-order, then showed good athleticism in sprinting in from cover-point and diving forward to take the catch millimetres from the turf as Brathwaite could not control a delivery from Lakmal which lifted sharply at the batsman.

Kumara was also grateful for the support from his fielders when Kusal Mendis held a good low catch at second slip when Powell pushed at a full-length delivery without covering the ball properly. Then after impressing with an expansive cover-driven boundary before the rain-break, Chase was bowled in Rajitha's first over, dragging a delivery onto his middle stump.

Off-spinning all-rounder Dilruwan Perea, who has replaced Akila Dananjaya in Sri Lanka's other change from the drawn second Test, bowled the final over of the session but, as expected that the visitors relied heavily on their three seamers in between the showers in seeking to lay the foundations for a series-levelling victory.

Those expectations would have been boosted when Hope fell to Rajitha via another sharp Mendis slip catch. However the Sri Lankans were left frustrated deep into the night both by the resistance of Dowrich and Holder and the frequent interruptions by inclement weather.

With Chandimal already ruled out, any thoughts of recalling Rangana Herath for this must-win final match of the tour ended on Friday when the experienced left-arm spinner split the webbing in his bowling hand during catching practice on the eve of the Test.

Dinesh Chandimal Cricket
Get the latest updates on SA vs IND 2021-22, check out the Schedule and Live Score . Like us on Facebook or follow us on Twitter for more sports updates. You can also download the NDTV Cricket app for Android or iOS.