West Indies vs Sri Lanka, 2nd T20I: Wanindu Hasaranga, Akila Dananjaya and Lakshan Sandakan were in top form for the visitors in their win by 43 runs. 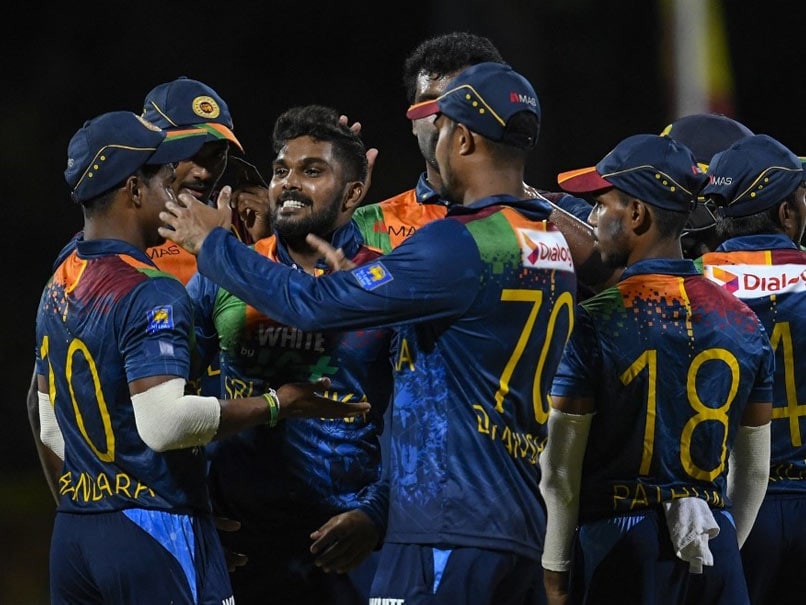 WI vs SL: Sri Lanka celebrate a wicket during the second T20I vs West Indies.© AFP

Sri Lanka's spinners bamboozled world champions West Indies to claim a 43-run win in the second Twenty20 International at Coolidge Cricket Ground on Friday. Having lost by four wickets in the opening game on Wednesday, in a game where West Indies skipper Kieron Pollard launched six sixes in an over, the tourists successfully defended 160 on Friday to level the three-match series. West Indies were all out for 117 in the 19th over as Sri Lanka ended an eight-game losing streak in T20I. The final match is at the same venue on Sunday.

Leg-spinner Wanindu Hasaranga finished with 3-17, off-break bowler Akila Dananjaya, who was the victim of Pollard's midweek assault but also claimed a hat-rick, had 1-13.

Wrist spinner Lakshan Sandakan took 3-10, including Pollard who made just 13.

"The wicket was a bit slow. I tried not to give away any boundaries. That's why I was able to bowl well," man-of-the-match Hasaranga told the post-match presentation.

West Indies were 45-1 before five wickets fell for just 21 runs.

Chris Gayle, who was out for a first ball duck on Wednesday in his first appearance in two years, made a patchy 16 when he fell to a catch by Ashen Bandara off Hasaranga.

Opener Lendl Simmons (21) was next out, lbw failing to pick a Hasaranga googly.

Dananjaya had earlier dismissed opener Evin Lewis for six. His impressive figures of 1-13 were in stark contrast to his 3-62 on Wednesday.

Hasaranga, just 23, added Fabian Allan to his list of victims with the West Indies then struggling on 89-7 in the 16th over.

With more than 22 an over required, Sandakan then got the big prize of Pollard, caught in the deep for just 13 having surprisingly opted to bat at number seven.

Sandakan then halted Obed McCoy's late cameo of 23 from seven deliveries with the tail-ender proving to be his team's top scorer.

Earlier, veteran all-rounder Bravo slammed the brakes on Sri Lanka with two wickets and a run-out.

Sri Lanka got off to a flying start after winning the toss and deciding to bat.

Openers Danusha Gunathilaka and Pathum Nissanka put on a blistering 94 off the first 10 overs.

But then 37-year-old Bravo was called into action and he responded by running out Nissanka for 37.

Gunathilaka followed just four balls later in the 11th over, caught by Kevin Sinclair off Bravo at mid-off.

The Sri Lankan opener went for a top score of 56 which featured four boundaries and two sixes.

The runs then dried up for Sri Lanka.

Having hit eight fours and three sixes in the first 10 overs, they managed just three more fours and one six in the second half of the innings.

That included an eight-over stretch where the ball never crossed the boundary ropes.

Sri Lanka Cricket Team Wanindu Hasaranga Akila Dananjaya Lakshan Sandakan West Indies vs Sri Lanka, 2nd T20I Cricket
Get the latest updates on ICC Women's Cricket World Cup 2022 and IPL 2022, check out the Schedule , Live Score and IPL Points Table. Like us on Facebook or follow us on Twitter for more sports updates. You can also download the NDTV Cricket app for Android or iOS.