West Indies turned a leisurely canter into a desperate scramble to achieve a series-clinching five-wicket victory over Sri Lanka with two balls to spare in the second ODI. 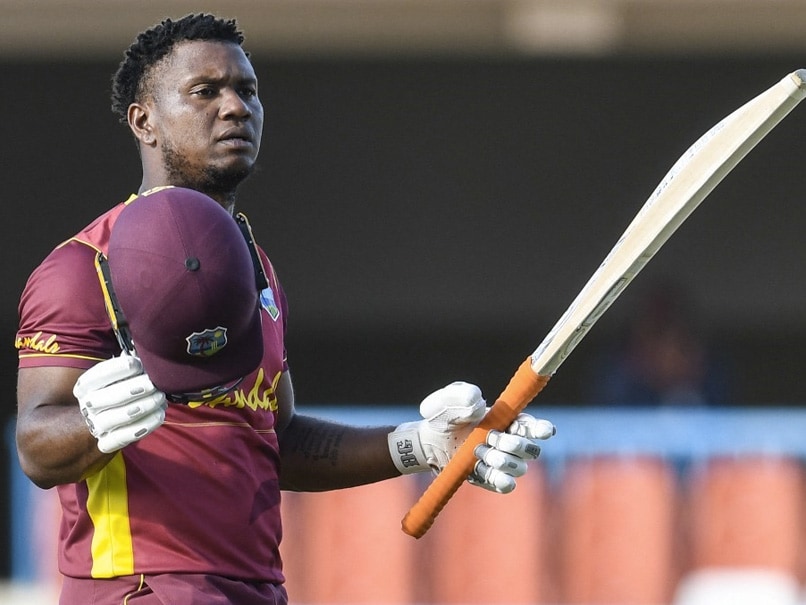 Evin Lewis starred for the West Indies in the chase, scoring his fourth ODI hundred.© AFP

West Indies turned a leisurely canter into a desperate scramble to achieve a series-clinching five-wicket victory over Sri Lanka with two balls to spare in the second One-Day International of their three-match series at the Sir Vivian Richards Stadium in Antigua on Friday. A fourth ODI hundred by Evin Lewis and an elegant supporting 84 by opening partner Shai Hope seemed to have set the home side up for an effortless stroll to the target of 273 as the pair put on 192 for the first wicket.

However, Lewis' dismissal for 103 in the 38th over triggered a surprising level of indecisiveness with the Sri Lankans coming to life in the final stage of the match as seamers Nuwan Pradeep and Thisara Perera claimed two wickets each.

But when he most needed to be on target, Pradeep's final two overs were plastered for 28 runs with Nicholas Pooran's unbeaten 35, which included two boundaries in the last over the match, taking the West Indies to an unbeatable 2-0 lead ahead of the final match at the same venue on Sunday.

Lewis' hundred, which came off 121 balls and was embellished by eight fours and four sixes, earned him the man of the match award.

"It was a total team performance. Our best chance was chasing so it was good to see the boys sticking to the their plans," said West Indies captain Kieron Pollard.

Earlier, Danushka Gunathilaka just missed out on a century as Sri Lanka posted a competitive 273 for eight after being put in to bat.

Two days after his controversial dismissal -- he was ruled to have obstructed the field in a run out attempt by Pollard -- the left-hander played fluently for 96 in helping his team recover from an indifferent start.

Fast bowler Alzarri Joseph's early double-strike and Oshada Fernando's demise with the total on 50 was counteracted by a efficient 100-run stand for the fourth wicket between Gunathilaka and Dinesh Chandimal.

Four runs short of his third century in this format of the game though, the left-hander fell to Jason Mohammed.

As in the first match, which the West Indies won comfortably by eight wickets, Mohammed continued to show his worth as more than the general categorisation of him as a part-time off-spinner by taking three for 47 off ten overs.

While Gunathilaka paced his innings at a run-a-ball, Chandimal was more circumspect, although his contribution of 71 was important to ensure the tourists were able to post a challenging target.

They also benefited from exciting late pyrotechnics from Wanindu Hasaranga, who thrashed 47 off 31 balls with four sixes and two fours.

But the leg-spinner, such a potent threat in the preceding T20 International series, was kept wicketless for the second consecutive match.

That lack of success was especially disappointing for Sri Lanka captain Dimuth Karunaratne.

"The spinners are expected to take wickets," he stated flatly at the end of the match.

"We lacked wicket-taking options and that's why we couldn't put pressure on the West Indies."

Dinesh Chandimal West Indies vs Sri Lanka, 2nd ODI Cricket
Get the latest updates on Fifa Worldcup 2022 and check out  Fifa World Cup Schedule, Stats and Live Cricket Score. Like us on Facebook or follow us on Twitter for more sports updates. You can also download the NDTV Cricket app for Android or iOS.