Medium-pacer David Willey knocked over the Windies top-order in finishing with career-best T20I figures of four for seven from three overs. 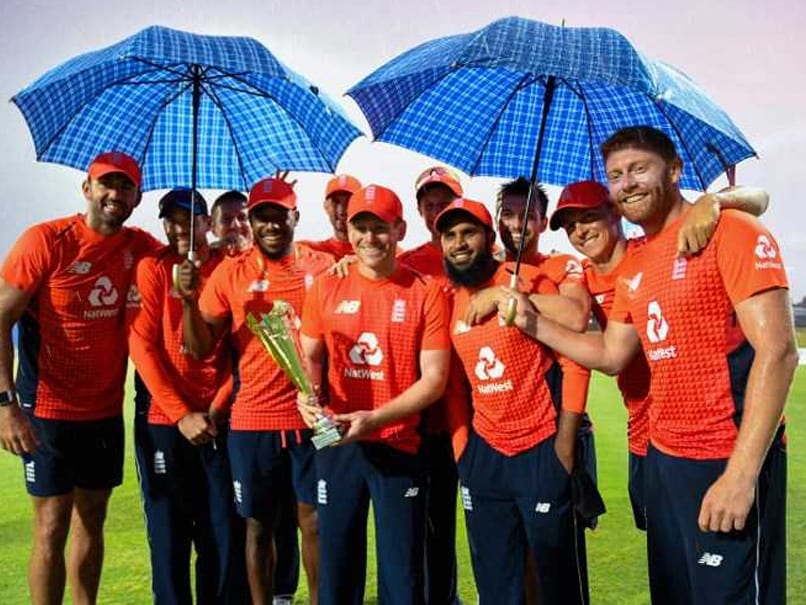 England completed a 3-0 sweep of the series with an eight-wicket victory in the third T20I.© AFP

David Willey spearheaded another rout of an undisciplined Windies batting line-up as England completed a 3-0 sweep of the series with an eight-wicket victory in the third and final Twenty20 International (T20I) at Warner Park in St Kitts on Sunday. Medium-pacer Willey knocked over the top-order in finishing with career-best T20I figures of four for seven from three overs to take the man of the match award as the hosts were demolished for 71 off just 13 overs. Willey's teammate and fellow all-rounder Chris Jordan was named man of the series.

Jonny Bairstow, man of the match in the first fixture in St Lucia five days earlier, then sped the visitors toward their target with 37 (31 balls, two sixes, four fours) as the whitewash was completed with almost ten overs to spare.

Bairstow fell to Devendra Bishoo with victory in sight leaving captain Eoin Morgan to cart the leg-spinner for a six and a four off successive deliveries to seal the comprehensive result.

"It's been outstanding to see guys come in and take full advantage of the opportunity in this series," said Morgan in reflecting on his team's complete dominance of the three matches.

"It takes some time to get accustomed to conditions and I thought we got better for those who were part of the ODI series as well."

Fast bowler Mark Wood, playing his first game of the T20I series in place of the fast-medium Liam Plunkett, maintained the pressure after Willey's early successes in taking three for nine while leg-spinner Adil Rashid finished off another pitiful batting effort by the world champion Caribbean side with two wickets in two overs.

Dismantled for their lowest T20I total ever, 45, on the way to a 137-run thrashing in the second match two days earlier at the same venue, Jason Holder's decision to bat first on winning the toss made no difference with Shai Hope falling to the very first ball of the match from Willey to set the tone for another collapse.

Hope's opening partner, John Campbell, making his T20I debut in place of the rested Chris Gayle, was one of four players to get into double-figures -– twice as many as on Friday -– although it made no meaningful difference to the innings.

For the Windies, who were impressive and competitive in the preceding Test and One-Day International series, this was another piece of unwanted history as they became the first team in T20I history to be dismissed for under 75 in successive matches.

"I don't think there was a drop in intensity from us, we just didn't bat properly in the last two matches," said Holder in dismissing suggestions that his team lacked focus in the T20 fixtures.

"We just didn't adapt to the conditions properly and that's something for our batsmen to sort out."

Eoin Morgan West Indies vs England, 3rd T20I Cricket
Get the latest updates on India vs South Africa and check out  Schedule, Results and Live Score. Like us on Facebook or follow us on Twitter for more sports updates. You can also download the NDTV Cricket app for Android or iOS.