We let ourselves down, says Australia captain Michael Clarke

England squared the series 1-1 in the 4th ODI thanks to a dramatic and explosive 65 not out by wicket-keeper Jos Buttler to ensure the series goes down to the wire. 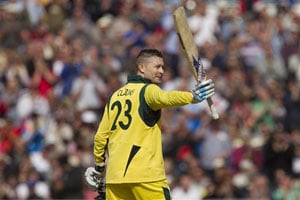 Australia skipper Michael Clarke hopes his side will recover from their close defeat to England in the 4th ODI at Cardiff as the two teams face off in the series decider on Monday.

"We just let ourselves down when it mattered most -- at the end. We did not get enough runs but the bowlers did really well until the final few overs," Clarke admitted.

"We felt we had it under control but you can never tell in this form of the game. Buttler played really well."

Meanwhile, England skipper Eoin Morgan believes the momentum and belief is now firmly with his England team as they prepare for their winner-takes-all clash with Australia at Southampton.

The stand-in skipper is confident the dramatic three-wicket victory over Michael Clarke's men at Cardiff on Saturday can be the turning point for even greater achievements.

England squared the series thanks to a dramatic and explosive 65 not out by wicket-keeper Jos Buttler to ensure the series goes down to the wire.

"We can go into that match with real confidence and the feeling that we have a chance to win the series, and we must grab it with both hands," said Morgan.

"If we win the fifth game then it will have been a very successful summer not just for the Ashes team but also the limited overs side. So it is a big match for us.

"We have so much potential and ability in this ODI squad. It's a very young squad which just needs time to develop and really show its skills.

"Winning a game like we did today will give the guys an enormous lift. The dressing room was very lively and excited at the end, and you want to it to be like that."

Buttler kept his nerve and composure to get England over the line after coming in with his side struggling and looking beaten on 144-6.

They needed 84 more runs from just over 11 overs but then he and young Durham all-rounder Ben Stokes turned the tide in England's favour with some flambouyant strokes.

Morgan said: "It was a world class innings from someone we all know can hit the ball very hard and a very long way.

"Jos always has the potential to win matches in that way. But this was such an important victory. Now we have the chance to win it in Southampton on Monday."

Stokes fell for 25 near the end but needing seven from the last over Buttler crashed the winning runs with a boundary off Mitchell Johnson.

Buttler said: "That's what I am in the side for. To get the team over the line when things get tight. We had a lot of hard work still to do when I came in and things did not look great but you always back yourself.

"My timing and selection were spot on and things went my way. Now we really want to finish it off on Monday."

Vice-captain George Bailey hit 87 to ensure Australia had set England a decent target but it was in the balance until Buttler's big hitting performance.

Michael Carberry and Morgan both hit half centuries to raise hopes of a possible win after Aussie fast bowler Clint McKay's stunning hat-trick.

The big Aussie fast bowler was called into their side as a late replacement -- and then left Kevin Pietersen, Jonathan Trott and Joe Root embarrassed when England set out to chase down Australia's 227 all out.

Pietersen was undone by a swinging delivery which trapped him lbw. But both Trott and Root were guilty of bad shots and getting themselves out.

It was the 34th hat-trick in ODIs and fifth by an Australian.

Comments
Topics mentioned in this article
Cricket Michael Clarke Jos Buttler Eoin Morgan Ravi Bopara Ricky Ponting Sreesanth Clint McKay England Cricket Team
Get the latest updates on IPL 2020, check out the IPL Schedule for 2020 and Indian Premier League (IPL) Cricket live score . Like us on Facebook or follow us on Twitter for more sports updates. You can also download the NDTV Cricket app for Android or iOS.