We Don't Have Bowlers to Win Single Test in England: Vengsarkar

Indian bowling will be led by Ishant Sharma and Bhuvneshwar Kumar but former cricketer Dileep Vengsarkar says the five-Test series against hosts England would be a massive challenge for them. 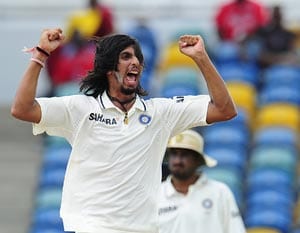 The young Indian attack will be led by Ishant Sharma and Bhuvneshwar Kumar in the challenging five-Test series, beginning next month.

Mohammed Shami, Varun Aaron and R Ashwin are the other bowlers in the Indian attack but Vengsarkar is apprehensive about their effectiveness.

"But you never know in cricket, anything can happen. I hope India does well. But England team is very good in England. After a long time we are playing a five Test match series, I hope we do well, that is important for us," he said.

The England tour commences on June 26 with a three-day game in Leicester.

Vengsarkar is of the belief that playing just two practice games before the Test series is not enough to get acclimatised to the conditions.

"First couple of Test matches will be tough because they have no clue about the conditions and they must prepare well. Two practice matches are quite less, they must play at least 4-5 matches before the first Test match," he said.

Former India player Ajit Agarkar, who was also present at the event said, "Five Tests is not going to be easy. But England are rebuilding as well, which might be a good thing for India. Their bowling attack looks settled with James Anderson. Stuart Broad maybe fit and in their conditions they generally bowl well. Couple of tours, our batsmen have done well in South Africa and New Zealand which will help."

With the Indian squad having many players who would be playing in England for the first time, Vengsarkar said adapting to the conditions would be key.

Vengsarkar, the only player to have scored three centuries at Lord's, said the Test series in England in 1979 was easy for the Indian team as they had played the World Cup over there, prior to the series. "We were there at least a month in advance before the Test match started, so we could adjust and adapt to the conditions," he said.

He parried a question on coach Duncan Fletcher's performance and said,"I believe in Indian coaches. Sanjay Bangar and W V Raman have done extremely well in IPL so you should root for Indian coaches."

Only three Indian players from the current squad have played Test matches in England but Agarkar said the inexperience is bound to be there with top players like VVS Laxman, Rahul Dravid and Sachin Tendulkar retiring in recent years.

"That is always going to be a challenge. When you have guys like Tendulkar or Dravid or Laxman suddenly leaving and with (Virender) Sehwag not in the team, those guys have played over a 100 Tests and when you have top four of the six batters suddenly gone in the space of last couple of years, you are going to have inexperience. But they have had reasonable tours of New Zealand and South Africa, batting wise," Agarkar said.