Having won the first match comprehensively, West Indies A drew the second game to lead the series 1-0 and the hosts would quickly need to make amends to get back to winning ways in a must-win encounter. 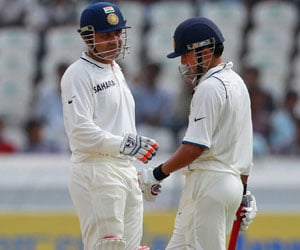 It will be a litmus test for the out-of-favour batsmen -- Virender Sehwag and Gautam Gambhir --as India A need nothing less than a victory to level the three-match series when they take on West Indies A in their third and final unofficial 'Test', starting here on Wednesday.

Having won the first match comprehensively, West Indies A drew the second game to lead the series 1-0 and the hosts would quickly need to make amends to get back to winning ways in a must-win encounter.

All eyes will be on Sehwag and Gambhir, both of whom require to shine with the bat in order to create a chance for themselves to make a comeback to the national side.

The show put up by the duo in the previous unofficial 'Test' at Shimoga was disappointing with Gambhir scoring 11, Sehwag managing only seven.

Sehwag has not scored a century in since his hundred against England in November 2012, while Gambhir's dry run with the bat has seen him without a hundred in 40 innings since January 2010.

Even pacer Zaheer Khan, who is also trying to get back into national reckoning, had a dismal outing in the last match with figures of two for 93.

But the fact that it was a slow pitch, which hardly helped the seamers, and also that Zaheer was playing his first match after an year's gap could be taken into consideration.

Zaheer has failed to take five wickets in a Test innings since October 2010, and his fitness and endurance have also been a concern. After the 2011 World Cup, he played just seven Tests.

The trio would be keen to go out in a positive frame of mind and make a mark tomorrow.

India 'A' captain Cheteshwar Pujara, besides motivating the team, would also be looking to put behind his own disappointing performance in last two matches where he managed just 45 runs from three innings.

The Saurashtrian knows the importance of tomorrow's tie and would try to repeat what he did during the South Africa A tour, where he scored a blistering century.

While Pujara will expect both Sehwag and Gambhir to come good in this match, he would bank on the likes of opener V A Jagadeesh and middle-order batsmen -- Abhishek Nayar and Uday Kaul -- to give stability to the team.

Three of them hit brilliant half-centuries each to take India A to a respectable 359 in reply to West Indies A's 406 in the last tie and restrict the visitors from posting a win.

With his nine-wicket haul in the previous match, Baroda's left-arm spinner Bharghav Bhatt will be heavily relied upon.

After an impressive outing in the first match where he pocketed seven wickets, Parveez Rasool had a forgettable show in the second 'Test' but come tomorrow he would be looking to make a point with his off-spin.

In contrast, West Indies A, riding high on their 1-0 lead, need just a draw to seal the series in their favour.

But they would certainly be aiming for another win, especially with their batsmen and spinners in top form.

Kieran Powell would also like to be among runs after a couple of bad innings.

The West Indian bowlers, especially spinners, have come to the party by exploiting the Indian conditions effectively in the last two matches and would look to continue to do so.

Comments
Topics mentioned in this article
Cricket Virender Sehwag Gautam Gambhir Cheteshwar Pujara
Get the latest updates on ICC T20 Worldcup 2022 and CWG 2022 check out the Schedule, Live Score and Medals Tally. Like us on Facebook or follow us on Twitter for more sports updates. You can also download the NDTV Cricket app for Android or iOS.