"Your Character Stood Out For Me," Virat Kohli Tells Mayank Agarwal

Virat Kohli was all praise for Mayank Agarwal during the second part of the opener's online chat show. 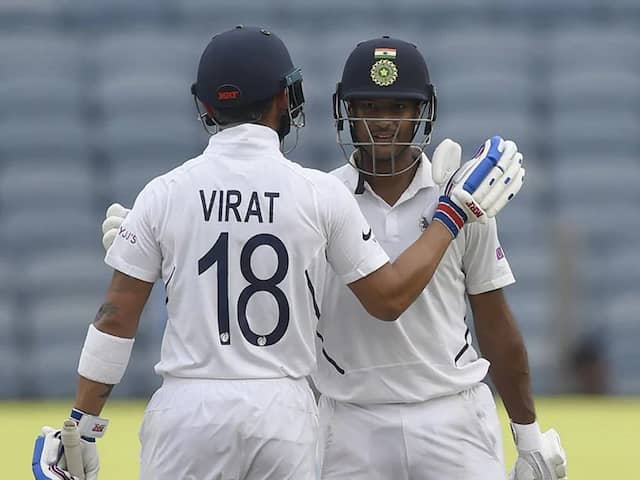 Virat Kohli talked about how Mayank Agarwal's character was something that stood out for him.© AFP

''Your character stood out for me than the number of runs you scored," said India skipper Virat Kohli while explaining his decision to give opening Mayank Agarwal a Test debut in the 2018-19 Australia series. Mayank Agarwal had made his Test debut against Australia in the third Test of the four-match series. Playing the third Test at the Melbourne Cricket Ground, Agarwal managed to register a half-century in his very first innings in the longest format. "I had seen you play for RCB, even then you played international bowlers with conviction and you would take them on. You were performing in first-class matches in a dominating way. That is something always stood out with you, I would say your character stood out for me than the number of runs. I knew you would be fearless without having any baggage," Kohli told Mayank Agarwal in a video posted on the official website of BCCI.

In the longest format of the game, Agarwal has managed to score 974 runs from 11 matches at an average of 57.29 with three centuries as an opening batsman.

The Indian skipper also explained as to what makes him notice in a player and added that it is important that guys in the team look to face new challenges and emerge triumphantly.

"For me, the biggest marker is how a person approaches the game, so for example when you opened and we made Vihari open with you. The first opportunity we presented Vihari to open the batting, he said yes to it and that matters me to the most," Kohli said.

"I opened in my first series for India, I said yes to this opportunity and things worked out fine for me. So, a guy who wants to get into tough situations will come out either holding his head high or learning from his mistakes," he added.

Kohli and Mayank would soon be seen in action for Royal Challengers Bangalore and Kings XI Punjab respectively in the Indian Premier League (IPL) starting from September 19 in the UAE.

At present, Kohli is ranked at the top spot in the ICC ODI rankings while he is in the second place in Tests rankings. Kohli has so far played 86 Tests, scoring 7,240 runs with 27 centuries at an average of 53.62.

South Africa Cricket Team IPL 2020 Cricket
Get the latest Cricket news, check out the India cricket schedule, Cricket live score . Like us on Facebook or follow us on Twitter for more sports updates. You can also download the NDTV Cricket app for Android or iOS.