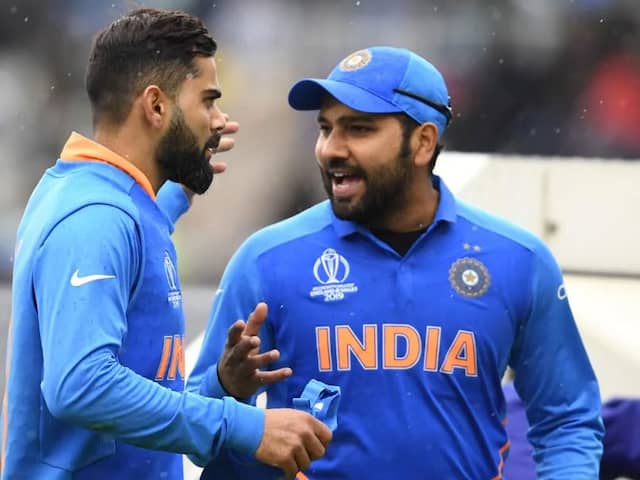 Virat Kohli and Rohit Sharma have impressed many with their passion for the game.© AFP

"Well, Virat Kohli, because he's more consistent when India have the big run chases. When India are batting second, he stands up and delivers," Hogg said.

"But you really cannot compare the two as they have different roles. Rohit's role is to be aggressive against the new ball bowlers when field restrictions are at their least and Virat's role is to bat through the innings and make sure he's there at the end, so they complement each other," he added.

The pair of the captain and his deputy has impressed many with their partnerships and passion for the game.

Recently, former Sri Lanka skipper Kumar Sangakkara termed both Virat and Rohit as two of the best players in the modern-day game.

According to Sangakkara, what makes the Indian duo stand apart from the rest is their ability to play orthodox cricket shots and to change gears to be absolutely destructive whenever needed.

"If you take the modern-day game, India has two of the best players in Virat Kohli and Rohit Sharma, who play orthodox cricket but who are just absolutely destructive in any format of the game," Sangakkara said on Star Sports show 'Cricket Connected'.

"You don't have to muscle the ball or put too much effort or look ugly doing it, they just play good cricket shots and results come," he added.

Virat and Rohit are locked down at home like the rest of the cricketers amid the coronavirus pandemic and will be seen leading their teams only if and when the Indian Premier League (IPL) begins. The IPL 2020 was scheduled to start on March 29 but has been postponed indefinitely due to the virus scare.

In the IPL, Rohit has led Mumbai Indians to the title on record four occasions, while Virat's Royal Challengers Bangalore are yet to win a single title.

Brad Hogg Cricket
Get the latest Cricket news, check out the India cricket schedule, Cricket live score . Like us on Facebook or follow us on Twitter for more sports updates. You can also download the NDTV Cricket app for Android or iOS.